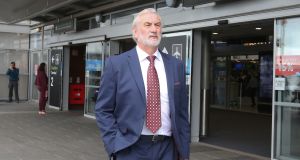 Talks aimed at ending a dispute between Ryanair and a group of its Irish pilots continued into Wednesday night as mediator Kieran Mulvey kept the parties around the table in search of common ground.

Ryanair and the Irish Airline Pilots’ Association (Ialpa), part of trade union Fórsa, this week resumed efforts to end the month-old dispute, which has led to five one-day strikes at the company, the latest one last Friday.

Both sides agreed not to make any public comment while the mediation continued and remained tight-lipped as the talks entered what is likely to be the final phase.

Mr Mulvey set aside three days - Monday to Wednesday - to work on bridging the gap between the company and the union.

The former chairman of the Workplace Relations Commission took over as an independent mediator this week following a proposal from Ryanair that Ialpa accepted.

About 100 of Ryanair’s 350 Irish-based pilots have been in dispute with the company since early July. The two sides indicated this week that they believed his intervention could help resolve the dispute.

About 100 of Ryanair’s 350 Irish-based pilots have been in dispute with the company since early July over base transfers, promotions, leave and other issues tied to seniority.

They have submitted 11 proposals to Ryanair regarding these problems. The airline says it has agreed to nine of these points, but the union rejects this and says there is still a distance between both sides.

Two meetings between the company and the union in the dispute’s early stages brought only limited progress towards a resolution.

The union has also warned that a threat of redundancies at Ryanair’s Dublin Airport base has complicated the dispute.

The airline’s board recently approved a proposal to cut Ryanair’s Dublin fleet from October with the possible loss or transfer of 300 jobs.

The carrier intends shifting a number of craft to Poland, where its charter airline is performing strongly.

Ryanair maintains that it frequently moves craft from bases where its performance is weak to those where business is better.

Disputes have also blown up between Ryanair and pilot unions in Belgium, Holland, Germany and Sweden, all of which held one-day strikes alongside Ialpa last Friday.

1 Who are Ireland’s 17 billionaires?
2 State subsidises public sector retirees to cover gap until State pension
3 My father in a nursing home wants to gift me his house
4 Richer countries must do more to tackle climate change, Thunberg tells Davos
5 Health insurance: Switch often for your financial wellbeing
6 Nama lends Cosgraves €15m to fund huge apartment development
7 Builders completed 21,500 homes in State during 2019
8 Q&A: Why has the pension age question suddenly become an election issue?
9 Are there annual limits on inheritances or gifts to a child?
10 Property firm sues engineering company over waterproofing of basement
Real news has value SUBSCRIBE