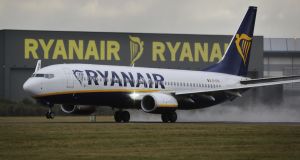 Ryanair had to cancel around one in six flights last week due to a walk-out by pilots in five European countries.

German passenger rights company Flightright is taking Ryanair to court over whether it should pay financial compensation to passengers affected by strikes at Europe’s largest low-cost carrier.

Ryanair had to cancel around one in six flights last week due to a walk-out by pilots in five European countries, disrupting an estimated 55,000 travellers.

The worst affected country was Germany, where 250 flights affected around 42,000 passengers.

EU rules state that passengers can claim monetary compensation of up to €400 for flights within the region for cancelled or delayed flights, unless the reason is extraordinary circumstances, such as bad weather.

Flightright said it believes Ryanair is therefore obliged to pay monetary compensation to customers and so has filed a complaint with a court in Frankfurt in a bid to clarify the rules around strikes.

A spokeswoman for the court said she was aware of the Flightright statement, but that she had not yet seen the complaint.

Ryanair said it fully complies with the European legislation on the matter, known as EU261.

“Under EU261 legislation, no compensation is payable when the union is acting unreasonably and totally beyond the airline’s control. If this was within our control, there would be no cancellations,” a spokesman said.

Passenger rights groups such as Flightright help passengers to claim compensation from airlines under EU261 rules but in exchange for a share of the compensation received.

Many European airlines, including Ryanair, therefore urge passengers to file claims with them directly instead. – Reuters