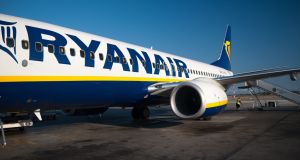 Passenger traffic at Ryanair fell 97 per cent in June, as the Covid-19 pandemic continued to shut down most international travel.

The company said it carries a total of 400,000 passengers during the month on its main services, down from 13.6 million a year earlier.

The airline operated 2,800 scheduled flights out of a planned 79,600 during June, with travel restrictions around Europe causing thousands of flights to be cancelled for a third month.

In contrast, Ryanair began flying 1,000 flights a day across Europe – around 40 per cent of its usual capacity – from July 1st as travel restrictions begin to lift. The airline is making it mandatory for crew and passengers to wear face masks on its flights, and accepting only card playments for inflight sales.It expects to carry 4.5 million passengers this month.

The shutdown of international travel has hit the airline industry hard in its traditionally busy summer season. Ryanair has already cut more than 250 staff from its offices around Europe, and is planning around 3,000 additional job losses if it cannot agree pay cuts with pilots and cabin crew.

Chief executive Michael O’Leary has been among the most vocal critics of the current quarantine policy that forces travellers to isolate for 14 days when travelling into Ireland from other countries, describing it as a “useless form-filling exercise at airports”. The UK has scrapped its its quarantine rules in favour of air bridges to most of Europe.

The Government said is finalising its roadmap for safe overseas travel “very shortly”, but thousands of potential holidaymakers have been left in limbo as the official advice remains to avoid unnecessary travel abroad.