KLM service from Cork to Amsterdam to take off in August 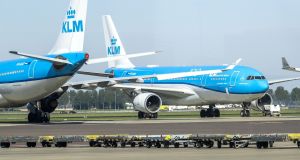 The Dutch government said it would provide Air France-KLM’s Dutch subsidiary KLM with a €3.4bn package to help it survive the coronavirus pandemic. Photograph: Getty Images

KLM’s Cork Airport to Amsterdam Schipol service will take off in August, more than four months after it originally planned to begin flying the route.

The airline, part of Air France KLM, said on Friday that it would begin the Cork-Amsterdam flights on August 3rd. Covid-19 travel bans grounded original plans to launch the service on March 30th.

The move comes as the Government announced that it will axe its controversial blanket rule, forcing all those travelling into the Republic to quarantine for 14 days, from July 1st.

KLM’s announcement also comes as Ryanair group chief executive Michael O’Leary launched a broadside at the Dutch government for agreeing to pay €3.4 billion to bail out the European carrier’s parent.

Mr O’Leary calculated that the subsidy amounted to €200 from every “man woman and child” in the Netherlands. “This is a poor deal for the ‘trading nation’ which likes to lecture other EU countries about fiscal rules, but has no problem breaking these rules when it comes to subsidising KLM.”

He pointed out that for that €200, Dutch people would each be able to buy five Ryanair flights.

“This Dutch government subsidy is also bad news for competition and consumers’ interests as it will further delay the necessary reforms at the bloated Air France-KLM. ”

The Dutch government on Friday said it would provide Air France-KLM’s Dutch subsidiary KLM with a €3.4 billion financing package to help it survive the coronavirus pandemic. Finance minister Wopke Hoekstra said the package would consist of €2.4 billion in bank loans with guarantees, and a €1 billion direct loan. France announced a €7 billion bailout package for Air France in April.

“This package is needed to make sure that KLM and Air France can continue to fulfil the important role that they have in our economy,” Mr Hoekstra told a news conference in The Hague.

Pilots will have to take a pay cut of up to 20 per cent, and the company as a whole will have to cut costs by 15 per cent. There was no word on layoffs, which are expected, but Mr Hoekstra said some cuts were inevitable to KLM’s staff of 30,000.

Ryanair called on the EU to block the aid. The Irish group is challenging several government bailouts of European airlines in the EU’s courts.

Niall MacCarthy, managing director at Cork Airport, welcomed the news that KLM planned to launch the Amsterdam service in August.