Ryanair is facing a crisis: is O'Leary right person to lead it? 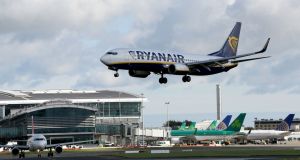 Ryanair let the union genie out of the bottle shortly before Christmas when it was facing strike threats from Ialpa, VC and their Italian counterpart Anpac among others. File photograph: Paul Faith/AFP/Getty Images 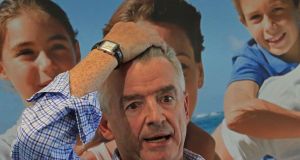 Michael O’Leary during a Ryanair press conference last year. He recently told investors he wants to stay on at least until Ryanair hits its 200m passenger target. Insiders say the board supports him in this. Photograph Nick Bradshaw 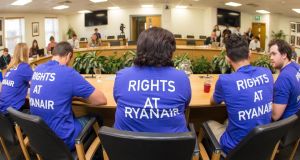 A year ago the prospect of a strike at Ryanair would have been unthinkable. It remained steadfastly non-union, a significant exception to its peers in Europe and North America, where organised labour is very much the rule. The only industrial action the Irish carrier worried about was persistent stoppages by French air traffic controllers.

This week the Irish Airline Pilots’ Association (Ialpa) – affiliated to trade union Fórsa – served notice that around 100 directly-employed members at Ryanair would strike for 24 hours next Thursday in a dispute over seniority.

1 Covid-19: Further 1,025 cases confirmed in State
2 Transmission of Covid-19 on flight into Ireland linked to 59 infections
3 When Anthony Clare met ‘calculating, disturbing’ Jimmy Savile
4 Two hundred Irish retailers for all your online Christmas shopping
5 Sacha Baron Cohen: ‘I had to ring the alarm bell and say democracy is in peril’
6 Seán O’Brien: Anger over my parents’ break-up never left me
7 Martin Feeley: Hospital admissions don’t justify pressing the panic button
8 Garda inquiry into video appearing to show crowded shebeen
9 Illegal to sell PPE as an excuse to keep businesses open says Varadkar
10 Covid-19: Spain prepares for new state of emergency to curb rapidly rising cases
11 Lockdown mid-term: what to do, watch and cook this week
12 Gardaí to investigate whistleblower claims at Limerick city and county council
13 Life under Level 5: Where can I go, who can I see, what is closed and what is open?
14 New Covid-19 contact-tracing regime to be established for schools
15 The baby black market
16 David McWilliams: Lockdown decision makers still get paid. Those they shut down do not
17 Strengthen your muscles without leaving the house
18 We need to reverse our thinking on lockdown
19 President urged to not sign Bill on mother and baby home records into law
20 Further anti-lockdown protest held in Dublin city centre
21 France recalls Turkish envoy after Erdogan claims Macron needs mental help
22 Policy failed us during the banking crisis and it’s failing us again
23 ‘I’m sleeping with my ex-boyfriend and want him back – but don’t want to scare him off’
24 Couple found guilty of murdering Irish dancer with ‘devil’s breath’ drug
25 US election: Trump visits battleground states as Covid-19 numbers surge
26 Rock’ n’ wool: Irish knits come in from the cold
27 Sophia Loren: ‘I never had a relationship with my father’
28 How to cosy up your outdoor space this winter
29 Q&A: Mother and Baby Homes Commission database
30 Effectiveness of Covid-19 vaccine could be known before end of year – Fauci
31 Gardaí find ‘fully operational bar’ after visiting suspected shebeen
32 Why Waterford is ‘the best Covid county in Ireland’
33 Trauma of adoption saga outlined in court judgment
34 2020 All-Ireland Senior Hurling Championship key dates
35 Sinn Féin ‘summoned’ people to Storey funeral to deliver political message - Taoiseach
36 Champagne Football: bursting John Delaney’s bubble
37 Jennifer O’Connell: No transparency behind swerve into severe lockdown
38 Maureen Dowd: Biden the anti-venom for Trump’s poisonous menace
39 Homeless woman’s courage praised as man jailed for sexual assault
40 Borat 2: Rudy Giuliani’s trouser-reaching scene is the work of a daring young woman
Real news has value SUBSCRIBE