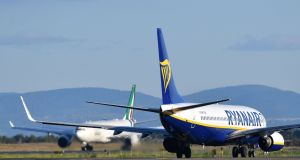 Three Ryanair Boeing 737s have been grounded due to cracks between the wing and fuselage, it emerged yesterday

Three Ryanair Boeing 737s have been grounded due to cracks between the wing and fuselage, it emerged yesterday. The airline declined to comment to The Irish Times on who discovered the cracks, when they were discovered, or whether the aircraft in question had been operating in Irish air space recently.

Staying with problems at Boeing, Ciarán Hancock meets a leading Irish aviation executive who is in line to take up a senior role with the aircraft maker next year and says he would be happy to be one of the first passengers to travel on a 747 Max jet whenever the aircraft is certified as safe to fly again by regulators.

Ikea has breached the ¤200 million mark in sales in Ireland after its 10th year in operation here as it puts expansion of its physical network on hold, reports Peter Hamilton.

Meanwhile, Dublin city centre is set to get its first new cinema in many years after plans for a new two-screen facility in Dawson Street have been given the green light.

At the Web Summit, Mark Paul met the father of the online privacy, David Chaum, who warned that the growing realisation among ordinary people that their private messages online could easily be spied upon by governments is causing “an erosion of confidence in democracy itself”. Earlier in the day Ireland was taken to task by Microsoft president Brad Smith, for the lack of access to broadband in parts of the Republic.

Finally, in her column this week, Karlin Lillington argues that it’s futile to argue about banning political advertising online; what’s really needed is a ban on all indiscriminate data gathering.