Brexit a ‘significant challenge’ to City of Derry Airport 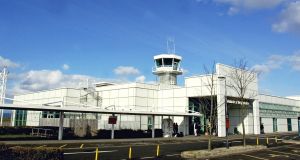 City of Derry Airport: some 200,000 passengers use it each year, and it is estimated that around 40% of these are cross-Border passengers, chiefly from Co Donegal

Brexit poses a “significant challenge” to the City of Derry Airport, which will need £6 million (€7m) in financial support if it is going to continue to operate after March 2021, its owners have warned.

Around 200,000 passengers use the North’s smallest airport each year, and it is estimated that around 40 per cent of these are cross-Border passengers, chiefly from Co Donegal.

The airport is 100 per cent owned by Derry City and Strabane District Council, but it is operated by the Regional and City Airports group, which also owns a number of airports in the UK.

The council, which has up to now subsidised the airport with £2.145 million in funding each year, has indicated that the City of Derry Airport has seen a fall in its passenger numbers.

It has also warned that “Brexit uncertainty poses risks for load factors and income levels”.

The council has also outlined that in order to guarantee the airport’s survival to March 2021 it will have to provide a further injection of funding up to a maximum of £750,000 on top of its subsidy.But after that its future could be up in the air unless the airport can be guaranteed significant new financial assistance from the British government.

The UK’s department for transport currently subsidises flights between the airport in Derry and London under a public service obligation. The airport does not receive funding from the Irish Government.

Earlier this year there were serious concerns over the viability of the City of Derry Airport when it lost its key Derry to London Stansted service, after flybmi ceased all its operations.

The Scottish airline Loganair then stepped in to operate a twice-daily service between Derry and London, and the airport’s future once again appeared to be secure.

However, Derry City and Strabane District Council’s confirmation of the airport’s “current financial challenges” might ground the council’s ambitions to develop new routes and improve connectivity to the northwest.

The council said it now plans to ask the British government for further “financial assistance to secure the sustainability of the City of Derry Airport beyond March 2021”.