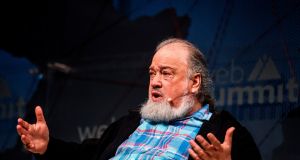 US-based David Chaum said the growing realisation among ordinary people that their private messages online could easily be spied upon by governments is causing “an erosion of confidence in democracy itself”.

Privacy and the protection of online communications have emerged among the main themes at this year’s Web Summit in Portugal, with a swathe of conference debates covering the issue.

One speaker, the pioneer cryptographer known as the “father of online privacy”, US-based David Chaum, on Wednesday launched XX Messenger.

Operated by Mr Chaum’s Elixxir project, XX Messenger is an app that uses blockchain technology for a messaging service that he says can’t be spied upon, and which continually scrubs out the metadata identifying sender and receiver.

Speaking afterwards to The Irish Times, Mr Chaum said the growing realisation among ordinary people that their private messages online, via well-known messaging app brands, could easily be spied upon by governments is causing “an erosion of confidence in democracy itself”.

“That’s a slippery slope. You can’t solve that by hoping for legislation. Forget that,” he said. “The only hope is: people move from one social media system to the next... to a replacement product. If it does the same thing, but with no metadata, they will move. That’s what we are providing.”

Mr Chaum is renowned as royalty among cryptographers, and is also credited with having invented the first digital currency, eCash, which he designed in the 1980s and implemented in the 1990s.

He is currently working on Praxis, a new digital currency that uses a form of blockchain that Mr Chaum says makes it resistant to attempts to compromise it by quantum computing.

“Facebook and Google and the like – they are sitting on rivers of money, selling your information to advertisers. There has never been free cash flow like that, and it is ill gotten,” he says.

“But no corporation can compete with what we are doing (with Elixxir and XX Messenger). Governments can also force corporations to give the keys. This [blockchain-enabled networks like XX] is our main chance, our only way through.”

Other speakers at Web Summit on Wednesday to touch on privacy issues included Facebook’s product director Jay Sullivan, who spoke about the company’s efforts to create “privacy by design” in its Messenger app.

On Thursday, Google’s engineering director, Stephan Micklitz, is also due to discuss the company’s efforts to improve privacy for users.

Mr Chaum is scheduled to take part in a debate on “Data and trust: A way forward”, which will explore how blockchain can be used to safeguard data.

More than 70,000 attendees have registered for Web Summit this year in Lisbon, its fourth year in the city since it was moved from Dublin by its co-founder and chief executive, Irish businessman Paddy Cosgrave.