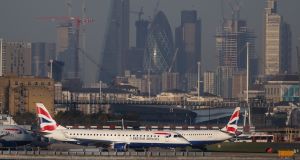 British Airways airplanes on the runway at London City Airport with the City of London in the background. Photograph: Daniel Leal-Olivas/ AFP/Getty Images

London City Airport turned 30 this week and will begin a big redevelopment in the New Year. Last year 4.6 million people used the airport. Following a long drawn-out planning applications the airport will engage in a £400 million (€450m) redevelopment to add extra aircraft stands, an additional taxiway, a new terminal building and other associated works to increase capacity by two million passengers per year. There are many Irish links to LCY. It has been the principal airport for Cityjet since the foundation of the airline. Dermot Desmond bought the airport from Mowlem developers in 1995 for £23.5 million and sold it in 2006 to Global Investment Partners for £750 million. The current chief executive is Declan Collier, formerly ceo of Dublin Airport. To mark the 30th anniversary of London City Airport, a new photography exhibition of images over the years is in Canary Wharf, in the Lower Mall of Jubilee Place.

Dublin hotel rooms are full more than 300 nights of the year according to the Fáilte Ireland SOAR report, Situation and Outlook Analysis Report. The accommodation capacity restraints are a major barrier to travel to Ireland. Only five hotels opened in the past decade in Dublin. Many new builds are already underway but it will be 2019 before pressure on capacity will ease. Despite the falling traffic from the UK, visitors from North America are up by 18 per cent so far this year.

How about getting this on your expense account, a $1,000 bagel? According to NBC New York, guests staying at the Westin New York Times Square will be able to purchase this amazing bagel. The breakfast meal will feature Alba white truffle cream cheese, goji berry-infused Riesling jelly and golden leaves. Alba white truffle is the second most expensive food in the world after caviar. The $1,000 bagel is available from November 1st to December 15th in aid of New York’s Holy Apostles Soup Kitchen.

The Transport Security Administration is setting new records in guns confiscated at security checkpoints in airports, many of them loaded. The agency is on track to confiscate almost 4,000 firearms this year. In one week in October they confiscated 69 firearms and 54 were loaded.

3 US removes stumbling block to global deal on digital tax