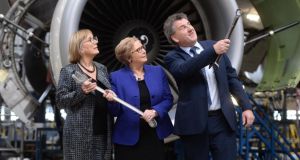 An Irish aircraft maintenance specialist born out of the closure of a multinational plans to boost jobs by 150 to 350 over the next three years.

The company’s chief executive, Michael Tyrrell, announced the expansion on Thursday and confirmed that the company would fill almost 50 of the positions by the end of the month.

Dublin Aerospace will hire the remaining 100-plus workers over three years, bringing its total workforce from 200 people currently to 350.

According to Mr Tyrrell, the company plans to invest €12 million over the next five years.

He pointed out that Dublin Aerospace pays staff a regular profit share, but has not paid a dividend to shareholders, as it is continuing to reinvest in the business.

Most of its staff are highly skilled technical and engineering workers. Executive chairman Conor McCarthy stressed that the new jobs would be full-time and permanent.

“Since our start-up in 2009 with just 18 staff, our annual turnover has risen from €7 million to €46 million last year and we have been profitable since our second year in operation,” he said.

Mr Tyrrell pledged that the company would continue with its apprenticeship and trainee programmes, which it runs with Solas, the further education and training authority.

Graduates of these five programmes filled 17 of the first 48 posts created in the current expansion.

However, speaking after the announcement, Mr Tyrrell acknowledged that his industry faced problems attracting potential apprentices.

He suggested that schools have become too focused on directing students to universities. “Maybe we need to do a better job selling it,” he said.

“Someone two years out of their time on our apprenticeship programme would earn €50,000 a year. You can’t say that about people coming out of a lot of college courses.

“They can see the world, they can move into the aircraft leasing industry, it’s a fantastic opportunity.”

Tánaiste and Minister for Business, Enterprise and Innovation Frances Fitzgerald, said she and the Minister for Education, Richard Bruton, knew that many industries needed apprentices.

“We need a whole new emphasis on apprenticeships and training, the time is right for it,” she said. Ms Fitzgerald added that both departments were working on the problem.

State agency Enterprise Ireland backed Dublin Aerospace when it was founded in 2009 and is supporting the expansion announced on Thursday.

“Today’s announcement is a significant milestone for the company and cements Dublin Aerospace’s future success and anchorage in Dublin,” she said.