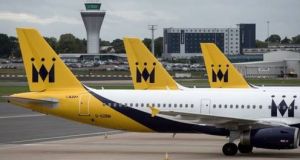 It wasn’t exactly Dunkirk, but the 165 passengers who touched down at Gatwick airport on Monday were the first contingent of Britain’s biggest ever peacetime repatriation operation.

The first returning holidaymakers flew in from Ibiza and, over the next two weeks, they will be followed by others from 30 destinations in a dozen different counties, from Spain, France, Greece and Italy to Israel and Sweden.

The collapse of Monarch Airlines left 110,000 people stranded overseas. Another 750,000 passengers yet to travel had their bookings cancelled – some just minutes before they were due to board their planes. Almost 2,000 Monarch employees have lost their jobs.

It is the biggest collapse of an airline in UK aviation history, and the industry UK regulator, the Civil Aviation Authority (CAA) , says the situation is “unprecedented”. The CAA has temporarily become one of the largest airlines in the country, securing a fleet of 30 aircraft to bring passengers home.

It’s a huge undertaking and so far the CAA had acquitted itself well. Almost 12,000 passengers returned on specially chartered planes on Monday and a similar number came back Tuesday.

There’s no extra charge, and holidaymakers who had only just left the country are also being allowed to enjoy the remainder of their breaks, with most offered return flights in line with their original Monarch schedule.

Monarch is a part of aviation history. Founded 50 years ago by the Swiss-Italian Mantegazza family, it is the UK’s oldest airline and started with just two planes flying out of Luton airport. It was 1968, and the package holiday industry was just taking off; holidays began to be marketed not just to the wealthy but to ordinary families, with the Spanish costas the most popular destinations.

The company has been struggling for some time, however. The rise of the budget airlines hit it hard, and the firm failed to respond to the changing market conditions quickly enough. More recently Monarch has suffered from falling demand in some of its most popular destinations – Egypt, Tunisia and Turkey – because of terrorist incidents.

Sterling’s decline in the wake of the Brexit referendum was a further blow, significantly increasing the airline’s fuel bill and depressing consumer demand.

The family owners of the firm gave up the struggle in 2014, selling Monarch to Greybull Capital, which specialises in turning round struggling companies. The airline’s long-haul routes were axed, costs were cut and, for a while, it seemed the slimmed-down Monarch might survive.

But just last month Greybull was forced to inject a further £165 million (€186m) into the airline to keep it afloat. At the time chief executive Andrew Swaffield was hoping the group would break even in its current financial year.

The cost of the CAA’s repatriation operation is put at around £60 million (€67.6m), which will be met by the taxpayer. As Monarch’s planes were leased, the owners took them back as soon as the airline’s administration was announced, which meant the CAA had to source its aircraft for repatriation from 16 countries.

However, the aviation regulator is hoping tour operators and credit card companies will step up to cover some of the £60 million.

Dame Deirdre Hutton, the head of the CAA, stressed on Tuesday that the demise of Monarch does not necessarily read across to the rest of the airline industry, which she said was “very buoyant”. For Monarch it was “a particular set of issues for this particular company”.

The market agreed, sending shares in rival airline companies higher. The absence of Monarch will reduce excess capacity in the market and could ultimately lead to higher prices, although industry experts said the effect is likely to be limited as Monarch had only a small market share.

Monarch’s collapse has been seen as particularly good news for Ryanair, which will doubtless be keen to snap up some of the firm’s 400 or so now unemployed pilots.

Ryanair has been forced to cancel thousands of flights after messing up its holiday roster and the relationship between the pilots and the group’s combative chief executive Michael O’Leary has become increasingly fraught.

Hiring captains from Monarch to plug the gap may do little to ease O’Leary’s problems in the short term, however, as the Ryanair fleet is made up of Boeing 737 jets while at Monarch the pilots flew Airbus A320 aircraft.

According to industry experts, retraining the Monarch pilots could take three to four months – and that’s always assuming they’d want to work for O’Leary in the first place.

Stocktake: History says this is not a bear market rally 05:30
Joint accounts: if one of us dies, can the other access the money? 05:30
Covid-19 has turned the volume up on musicians’ cut from streaming 05:27
Lucinda Creighton’s consultancy agrees partnership with US lobbyist 05:18
GDPR is two years old but still lacking resources 05:16