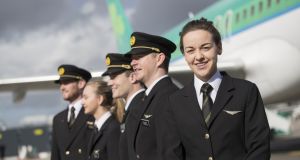 Thousands of pilots from around Europe, many from troubled carriers such as Monarch Airlines and Air Berlin, have applied for 100 jobs at Aer Lingus.

The Irish airline announced several weeks ago that it intends to hire 200 pilots over the next three years; it advertised the first 100 positions in October, and by the closing date, on Tuesday this week, almost 3,000 experienced pilots are understood to have applied.

Administrators took over Monarch last month; its collapse into insolvency, which left thousands of holidaymakers stranded, prompted the UK’s biggest peacetime repatriation. Air Berlin faces the prospect of a carve-up; its rival Lufthansa, whose revenue in 2016 was €31.7 billion, compared with €3.8 billion at Air Berlin, is poised to buy a large part of its business.

Like Aer Lingus, Monarch used Airbus aircraft, which means that the British airline’s pilots will need less training if they join the join the Dublin-headquartered carrier.

Aer Lingus is also thought to have received applications from pilots at Ryanair, which is in pay talks with its employee representative committees. Irish pilots flying with Ryanair could be drawn by the fact that Aer Lingus is offering a Dublin base.

Aer Lingus is recruiting the pilots as it continues to expand its European and transatlantic networks. Although it is benefitting from a shake-out in European aviation, 3,000 applications for 100 pilots’ posts is not considered unusual. The airline specifically sought experienced pilots in the recruitment round announced in October.

1 Michael Smurfit: ‘I asked Trump to invite me to the White House for my 80th birthday’
2 ‘I’m so lucky to be in the Caribbean – a million miles from Derry Girls’
3 Irish business of Carluccio’s restaurants to be wound up
4 Covid-19: Small businesses are left as cannon fodder in our zealous anti-virus experiment
5 Major investment in ports for offshore electricity industry urged
6 Revenue fears fraudsters tapped bank details of 3,000 taxpayers
7 Charlie Chawke plans 290 apartments and hotel on Goat pub site
8 Joint accounts: if one of us dies, can the other access the money?
9 Tax and the Pandemic Unemployment Payment: Your questions answered
10 HSBC board rethinks overhaul and seeks even deeper cuts
Real news has value SUBSCRIBE