Ryanair pilot problems could be solved at cost of a euro per ticket, US union chief says 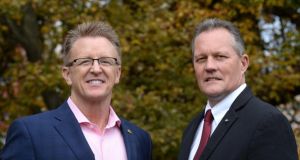 Following the Dublin meeting, both men, who represent almost 24,000 US pilots in Southwest Airlines and American Airlines, said the turnout indicated that current efforts to introduce a new collective bargaining system at the non-unionised Irish carrier could succeed.

“It was standing room only at both meetings,” Capt Carey noted, “and that’s taking into account that around half the pilots are flying on any given day.”

He and Capt Weaks said Ryanair pilots should back the new European Employee Representative Council (EERC) that a number of them are seeking to establish within the airline.

“We are trying to help them with logistics, research and financial data,” Capt Weaks said. “We can help with showing how to use communications effectively and with talking to investors.”

Capt Carey echoed this and indicated that his organisation was willing to provide training in areas such as dealing with the media and negotiating with management.

The EERC wants to replace Ryanair’s existing employee representative councils, which represent pilots at each of its 87 bases individually, with regionally-based collective representation. The airline’s chief executive, Michael O’Leary, has said it will not deal with the new group.

Reports of unrest at the airline emerged following news that rostering difficulties forced it to cancel flights up to next March, affecting almost 700,000 customers. Ryanair has said that pilots are not leaving the company and that it has recruited crew from rivals.

The US union leaders called on the airline to take a collaborative approach to dealing with its staff, which they argued would benefit both sides.

Capt Weaks pointed out that Southwest Airlines share price had almost doubled since last year, when his union negotiated a new deal with the carrier that was 128 per cent better than the company originally offered his members.

According to Capt Carey, American Airlines can solve problems such as the rostering difficulties that hit Ryanair this autumn with “just one phone call” to him.

Capt Carey said Mr O’Leary was a skilled chief executive who had “built a great airline” but argued that Ryanair needed to change its industrial relations approach. He added that its problems could be addressed by adding less than a euro to the price of each ticket.

The airline responded that the EERC was made up of competitor airline unions and was a rerun of other organisations, such as the Ryanair Pilot Group, which were now defunct.

“If Ryanair pilots wish to adopt a collaborative approach, they should use the Supreme Court-approved employee representative council process,” the airline said.

1 What is Covid Tracker Ireland?: New HSE app explained
2 British holiday home rental company exits Irish market
3 Central Bank considers legal action over Covid-19 insurance cover
4 Ireland’s economy forecast to shrink 8.5% due to Covid-19 pandemic
5 Will family’s tax debt stop me getting my inheritance?
6 Avolon cancels orders for 27 Boeing planes
7 Why gift a son now if it eats into his tax-free inheritance threshold?
8 Federal Reserve official warns US recovery may be ‘levelling off’
9 Shannon Airport workers reject 20% pay cut
10 How to save money while helping to save the planet
Real news has value SUBSCRIBE