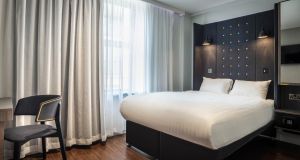 Raag caculates that it will cost around €18 million to build the hotel, which will employ between 30 and 35 people when it is operating.

Raag Hotels is spending €18 million on a new property in the Republic that the British company says will created up to 35 jobs.

The Queensway Group-Wellcome Trust joint venture confirmed this week that it has planning permission for a 95-bedroom hotel on St Augustine Street in Dublin’s Liberties district.

Raag caculates that it will cost around €18 million to build the hotel, which will employ between 30 and 35 people when it is operating.

The development will bring to €44 milllion the total that the company is investing in the Republic’s capital.

It has spent €26 million on a hotel on Parnell Street on the city’s northside that is due to open in April 2021.

Both will operate under its Point A budget brand which it launched in 2017.

Joe Stenson, Queensway Group development director, acknowledged that the business would have to live with the Covid-19 pandemic for some time, but argued that Dublin should rebound strongly from the crisis.

“Over the last four years Dublin has been a really strong performing European destination in terms of hospitality occupancy rates,” he said.

“Coupled with the fact that it has a fast growing corporate segment and scope for further airport expansion, this means we’re looking at a city that should be welcoming tourists and travellers back before long.”