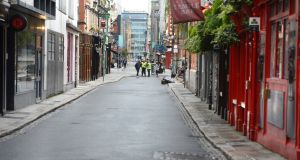 Financial consulting firm Crowe has called for the Government to devise a medium-term support plan for the decimated restaurant industry instead of relying on “short-term fixes”, as its research shows most outlets expect revenues through the vital Christmas period will be down by more than 40 per cent.

Crowe says that an average of 46 per cent of revenues in the restaurants it surveyed comes from international visitors. With European travel expected to remain heavily restricted through all of next year, Crowe says much of that revenue is not coming back anytime soon.

“We have to deal with the reality that the trade in international tourism will take some time to return,” said Crowe partner, Aiden Murphy, who wrote the report. “Domestic tourism just cannot make up for it. There is no point putting short-term fixes in place when we know we will have a problem here for the next 12-18 months.”

The firm has suggested that the State’s wage subsidy scheme, which is due to expire at the end of March, should be extended for the full year in 2021 to head off a wave of insolvencies.

“The wage subsidy is the critical lifeline for these businesses, and if that runs out and is not extended, it will cause a lot of businesses to run out of cash,” said Mr Murphy.

“The danger is that many insolvencies could come even sooner. The normal pattern is that Q4 (October to December) profits carry a business through Q1 and Q2. But that is not going to happen now and they’ve is no buffer for after Christmas.”

Between late August and mid September, Crowe surveyed 127 members of the Restaurants Association of Ireland, two-thirds of which were establishments outside of Dublin.

On average, their revenues were down 37 per cent in Q3 (July-September) and they estimated an average decline of 41 per cent for Q4. However, that was before the Government brought in Level 3 anti-virus restrictions for the whole country this week, effectively scuppering indoor dining and limiting outdoor dining to 15 patrons.

Mr Murphy said “the 41 per cent will become 90 per cent” for all but about one in 10 establishments.

Before the Level 3 restrictions were announced, the restaurants surveyed predicted year-on-year revenues would be down 42 per cent on average, and in 2021, they predicted they would be down 27 per cent on the last virus-free full year of 2019. One in five expect to be dealing with the effects of the pandemic two years from now.

Crowe said 87 per cent of respondents had closed fully during lockdown, with just 13 per cent doing collections or delivery, and that average reopening costs were €17,200 per restaurant.

More than a third of the restaurants had taken full repayment breaks on bank loans, while a further 13 per cent went interest-only. Mr Murphy warned that as banks end automatic payment breaks and go back to assessing applications case-by-case, that this would cause further difficulties for restaurants.

Almost all of the restaurants surveyed wanted an extension of rates waivers and a cut to the 13.5 per cent VAT rate in next week’s budget.