Peace may break out between Aer Lingus and DAA

Cantillon: Airline and airport operator are having a spat, but ultimately they need each other 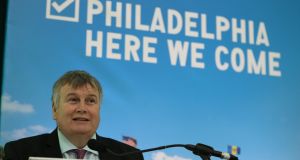 The remark stemmed from a rift between the airline and airport over infrastructure. Aer Lingus wants to grow transatlantic passengers at Dublin from 2.5 million this year to 4.5 million in 2020, relying on a strategy of using the airport to transfer passengers between its North American and European services.

The carrier says the airport’s owner, the DAA, risks hindering this by not spending enough on infrastructure. The DAA says it spends €100 million a year on this and will shortly present new investment plans to airline customers.

Airlines and airports regularly fall out over infrastructure. Nevertheless, this looks like more than the usual spat, as four years ago the airport said it supported the airline’s plans to use Dublin as a transatlantic gateway.

Since then, the pair’s businesses have grown quicker than anticipated. International Airlines Group (IAG) bought Aer Lingus and bankrolled its expansion while Dublin Airport’s numbers swelled by nine million to 28 million last year.

Aer Lingus’s market share in Dublin – including Aer Lingus Regional – has fallen to 34 per cent from 43 per cent four years ago, as the airline’s growth slowed. However, it is still a key player in Dublin and the pair need each other.

In fact, Rutter confirmed that his chief executive, Stephen Kavanagh, recently met DAA chief, Dalton Philips, and that their talks were constructive. An outbreak of peace looks close.