Both the European Commission and the Irish Aviation Authority (IAA) have warned planes could be grounded.

More than one third of all Irish air traffic could be grounded in the event the UK exits the EU without a deal in March, new figures from the umbrella group for European airports show.

Both the European Commission and the Irish Aviation Authority (IAA) have warned that if the UK leaves the bloc without a deal, EU rules on air transport will no longer apply, which would ground all flights between the UK and the EU.

In that event, a spokesman for the IAA said: “There would need to be a new agreement in place to maintain the existing level of connectivity between Europe and the UK.”

Separately, the European Commission said carriers in EU member states “will no longer enjoy traffic rights to or from the territory of the United Kingdom” in the absence of a deal.

The figures from Airports Council International (ACI), which represents more than 500 airports in 45 European countries, show the Republic is most exposed in the bloc to the issues facing UK air travel, with 37.4 per cent of all air traffic to or from there. 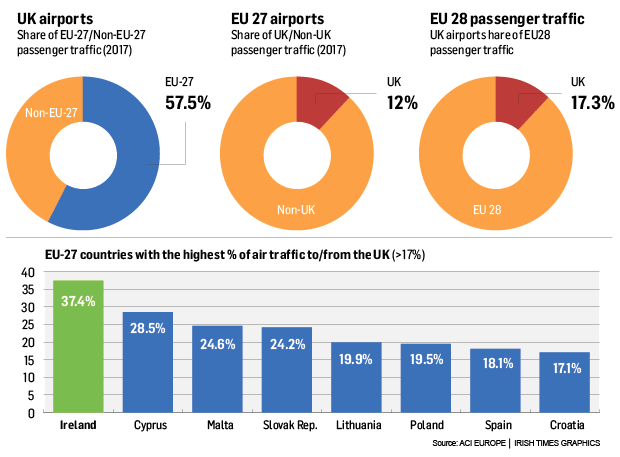 A spokeswoman for State-owned DAA, which operates Dublin Airport, pointed out that 10 million passengers travel between the Dublin and the UK annually.

ACI director general Olivier Jankovec has written to Pascal Leardini, who is leading a special unit in the European Commission preparing for a no-deal scenario, and said there will be havoc in airports all over Europe should negotiators fail to strike a deal.

Such a scenario, he said, would cost hundreds of millions of euro, compromise security, and would lead to a “highly degraded” service. He called on the commission to “urgently” develop contingency plans.

Speaking on Wednesday, Ryanair chief executive Michael O’Leary said a hard Brexit could ground Ryanair planes in the UK for up to three weeks, but that the budget airline would survive the storm.

“We can ground aeroplanes for a week, two weeks, three weeks,” he said. “It would be very painful. But we are a big company, we can survive.”

Mr O’Leary last month warned there were no assurances a deal would be reached to keep planes in the air.

“The strong liquidity of British Airways, easyJet and Ryanair should enable them to weather the financial impact of a no-deal Brexit, even if flights are disrupted for an extended period,” the report said.

“However, for airlines negatively affected by a no-deal Brexit, a sustained deterioration in liquidity and key credit metrics such as gross leverage or cash flow coverage could lead to negative rating actions.”

6:44 It would be a shame if we let Covid damage Ireland’s Céad Míle Fáilte

Ireland’s favourite beach resorts: where to eat and what to do there

Young people are bearing the brunt of this economic crisis 8 May
Bank of Ireland paves way for negative rates on accounts with over €1m 8 May
Air Corps bid for search and rescue services would result in job losses, union warns 8 May
FBD, ICG and Uniphar under fire over executive pay 8 May
Barnier’s Brexit diary, test gig joy and how Yahoo lost its exclamation mark 8 May

1 If I give my holiday home to my daughter what are the tax implications?

3 FBD, ICG and Uniphar under fire over executive pay

6 What would be the economic costs and benefits of a united Ireland?

7 Can I use the small gift tax exemption as rent relief for my son?

9 Aer Lingus has ‘too many resources’ amid Covid pandemic, airline warns