‘Please let this be the last lockdown’: Publicans urge end to rolling restrictions 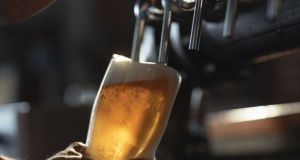 ‘Closing again is so difficult for the staff to accept,’ says Eimear Killian, the general manager of Brasserie on the Corner and Blake’s Bar in Galway. Photograph: iStock

“People were just so delighted to be out. It was so nice to hear people on the premises laughing and joking,” says Eimear Killian, the general manager of Brasserie on the Corner and Blake’s Bar, just off Eyre Square in Galway city. It has been open for more than eight years. The first seven were great; Galway is among the busiest tourist spots in Ireland. But 2020, the year of the pandemic, has been beyond hard.

“Closing again is so difficult for the staff to accept. This is the third time we have had to lay them off this year. Some of the staff are becoming emotional with the news today, they’re getting teary back there. Please let this be the last lockdown,” says Ms Killian.

The business employs 28 workers in the centre of the city. It serves classic brasserie and gastropub fare such as steaks and seafood. Normally at this time of year, Ms Killian says it would be “hopping” with groups and parties. But not this Christmas. After the Government moved to shut indoor dining until at least January 12th, and hinted it could be longer, the staff at Blake’s do not know when they will be back.

“We had an idea something like this was coming and we were bracing ourselves for it. But it was still a blow,” says Ms Killian. “We had 100 people booked in every night for dinner each night between Stephen’s Day and New Year’s, plus whatever we did for lunch. That’s all gone forever.”

As the Government has ordered gastropubs and restaurants to close at 3pm on Christmas Eve, the business has lost its 2.30pm sitting that day. It was booked out with regulars who come each year, Ms Killian says. On Tuesday afternoon, her staff were calling them all up to cancel.

“The chef was going to do the stock orders for the next week or two today. We were waiting until today to see what happens. We have enough food in now, and enough bookings, to get us through the next coupe of days. But there will definitely be some waste too.”

Ms Killian acknowledges that the trajectory of the virus numbers in Ireland and elsewhere in Europe meant a strong public health response was necessary and shutting the hospitality sector was an obvious decision.

“But it still would have been nice to be able to plan ahead. Don’t let us reopen again until we know that we can stay open, because this is just too hard,” she says.

Across the other side of the country, Deirdre Devitt, whose family owns the Two Sisters gastropub in Terenure in Dublin, was of similar mind. It had planned to open on St Stephen’s Day, and had stocked up in anticipation, but much of that will now be wasted.

“I’m devastated. People really don’t get the effort that it takes to shut down and then reopen all the time. We’re trying to deal with what this means for our staff and it is very hard on them. There had been a lovely atmosphere in the pub in recent weeks. But now we feel like we have been trounced.”

The business usually employs up to 25-30 staff. Once Christmas is finished and “we have all had a proper break”, Ms Devitt is hopeful that the Two Sisters can reopen for takeaway.

“But that will only be enough work for maybe my brothers, and possibly a chef, and maybe one or two more at most.”

Ms Devitt and Ms Killian both insist that their customers were compliant and respectful of anti-virus safety measures at all times in recent weeks.

“We were making the best attempt we could. We had traded over the summer and we were used to what to do. People were fairly compliant. Publicans know how to manage people; they are the best readers of people in this land.”

Ms Devitt says she is now “tired of hearing about lockdowns” and wants to hear a new approach.

“I want to hear a proper strategy that isn’t going in and out of shutdown. Give us a date from when we know we can reopen and we won’t be shut again. That’s what I want to hear.”