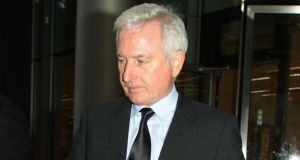 It is believed that, in addition to his annual fee, Paddy McKillen also has a stake in any future uplift in the Maybourne group’s value. Photograph: Yui Mok/PA Wire

Property developer Paddy McKillen last year received a £5 million (€5.5 million) management fee from companies controlled by the emir of Qatar for the Irishman’s oversight of the Maybourne luxury hotel group.

The breakdown of the fee paid to Mr McKillen, the co-owner of Jervis Street shopping centre, is contained in accounts filed in the UK this week for top London hotels Claridges, where Mr McKillen is overseeing a major revamp, the Connaught and the Berkeley.

Mr McKillen was previously a co-owner of the hotels but he sold his interests in 2015 to Sheikh Tamin bin Hamad al-Thani, the absolute monarch of Qatar. The Belfast entrepreneur was, however, retained as an adviser to the emir.

It is believed that, in addition to his annual fee, Mr McKillen also has a stake in any future uplift in the Maybourne group’s value, although he is not currently a shareholder in the hotels.

“Paddy McKillen personally manages and develops the hotels and the Maybourne brand with his team. He also has a substantial investment in the company,” said a spokeswoman for the developer.

Various accounts filed in the UK this week suggest about £1.8 million of the management fee paid in 2019 to Mr McKillen’s Dublin company, Hume Street Consultants, relates to his work at Claridges, which is well advanced on a major revamp that will include a £50,000-per-night penthouse.

The ownership of Claridges is vested separate to the group’s other London hotels in Coroin, which also owns an adjacent investment property to the Mayfair hotel. Its accounts show a drop in turnover last year of £9 million to £58 million.

The hotel went from a profit before tax of £4.1 million to a loss of £10.8 million, although much of the swing is accounted for by rolling closures of its room stock throughout 2019 to facilitate extensive building work. Its revenue per available room rose by a fifth.

The accounts suggest it may breach its banking covenants next year on its £376 million loans with property financier Barwa Bank, unless it negotiates further waivers. This is unlikely to be a major issue, however, as the bank is controlled by companies with close links to the Qatari state, while the emir has also pledged to fully financially support Claridges.

Accounts filed for Selene Midco, which owns the Berkley, the Connaught and another London hotel development project, show its revenues held steady last year at £107.9 million, while adjusted profits before tax fell from £6 million to £2.3 million. Mr McKillen’s long-time associate Liam Cunningham is a director of this company.

Maybourne this year opened a new hotel in Beverly Hills in Los Angeles, with further expansion planned in London and France.

‘Ireland is a great country, but we can’t help ourselves being nasty to people sometimes’ 20:26
European shares dip after taking lead from Wall Street 18:17
Why do we turn a blind eye to gig economy injustices? 18:06
New project will tackle forestry licence backlog 18:03
Moneylenders should be banned from using social media profile data, says Sinn Féin MEP 16:58