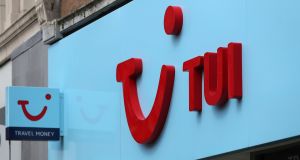 The holiday giant TUI has revealed it slumped to a€3 billion annual loss and is ramping up cost cutting as it warned bookings will not recover fully until 2022. Photograph: Martin Rickett/PA Wire

TUI Group on Thursday posted an annual loss of €3 billion as the pandemic choked travel demand and finances of the world’s biggest holiday group, forcing it to seek multiple bailouts from the German government.

The Hannover, Germany-based company said it will raise its cost-cutting targets to €400 million annually from the previous level of €300 million trying to become more efficient to help pay off new debts taken on to survive the crisis.

Last week, TUI secured a third bailout, striking a deal with the German government, private investors and banks for an extra €1.8 billion, on top of state loans of €3 billion it had already received.

“The rapid measures to cut costs and secure liquidity are important for the Group. They are a stable foundation for the future,” TUI chief executive Fritz Joussen said in a statement.

The company posted a loss of €3 billion, from €894 million of underlying core earnings (EBIT) last year, while revenue came in 58 per cent lower at €7.9 billion.

Following the latest bailout, TUI now has €2.5 billion of liquidity, and Joussen said the Covid-19 vaccine would help boost demand for holidays in 2021, forecasting a return to 2019 levels by 2022.