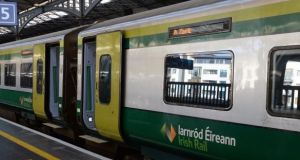 Talks are to take place at the Workplace Relations Commission on Thursday in a bid to avert a potential dispute on pay which could disrupt services on the country’s railways.

In advance of the new talks one of the main unions at Iarnród Éireann, the National Bus and Rail Union (NBRU), warned of inevitable strikes across the rail network within days if the company did not come up with proposals for “tangible pay improvements” .

Unions representing staff at Iarnród Éireann are currently balloting members for strike action as part of a claim for pay increases.

Unions have signalled that any industrial action, if approved in ballots, could take place in the run up to the October bank holiday weekend.

The ballot results are expected to be known on Friday.

The trade unions Siptu and the NBRU as well as mangement at Iarnród Éireann said they would attend the new talks on foot of an invitation issued by the Workplace Relations Commission.

The general secretary of the National Bus and Rail Union (NBRU) Dermot O’Leary said the new talks would “require a lot more from the company than the feeble efforts heretofore”.

“It is only a short few days since front-line workers at Iarnród Éireann were being lauded by the company hierarchy for their efforts towards getting vital economic and social rail services up and running in a matter of hours following Hurricane Ophelia.

“Those same workers are now seeking management to come to the table with a mandate to negotiate tangible pay improvements.”

“ The modus operandi to-date of simply turning up to the State institutions and engaging in a futile exercise of kicking the can down the road, by insisting that an efficiency- based pay award is the only show in town, will simply not pass muster for our members, and will inevitability lead to widspread disruption to all rail services, inclusive of Inter-city, Commuter and Dart within a matter of days.”

Siptu organiser, Paul Cullen, said: “Our members are mindful of the position of the Labour Court that all possibilities should be explored to find a just resolution to the dispute with management that has arisen due to its refusal to accept their reasonable pay claim.

“Due to this Siptu representatives will attend the Workplace Relations Commission on Thursday in order to explore the opportunity to process our members’ pay claim.”

“As always it is only as a last resort that our members will initiate industrial action.

“However, a ballot by our members in Iarnród Éireann for industrial action is currently underway. The counting of this ballot will go ahead as planned on Friday, 20th October.”

8 Chinese investments, AIB and Irish life team up and who foots the bill?