Aer Lingus to recruit 200 pilots over next three years 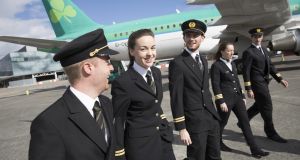 Aer Lingus has launched its “biggest ever” pilot recruitment drive.

Aer Lingus plans to recruit 200 pilots over the next three years as it continues to expand its network of services.

In a statement on Tuesday, the Irish airline said it wants to recruit 100 qualified pilots immediately to operate from its home base in Dublin airport. These will be pilots with at least 500 hours flight experience or multi-crew commercial experience who want to get “the opportunity to apply for pilot in command roles”.

Pilots will be expected to fly between 800 and 900 hours per year across the airline’s fleet of Airbus aircraft. On the European network, a pilot could fly up to five flights a day.

The airline has added five transatlantic routes to its long-haul network in the past two years, and will add services to Philadelphia in the US next year. This winter, Aer Lingus will operate its “largest ever winter programme”, having added 300,000 additional seats to both Europe and North America.

Its fleet is being expanded as it takes delivery of eight Airbus A321 Neo long-range aircraft in the next few years, and one new Airbus A330 by the end of 2017.

Mike Rutter, Aer Lingus chief operating officer, said the airline was seeking pilots “who are tuned into the challenging commercial priorities” faced by the carrier.

Salaries for the new recruits will range from €59,000 to €72,000 with other benefits including a contributory pension scheme and 34 days annual leave including public holidays. The closing date for applications is October 29th.

This recruitment drive for the IAG-owned Aer Lingus could cause further headaches for low-fares airline Ryanair, which is currently in the midst of a pilot shortage. The Michael O’Leary led airline is understood to have lost experienced pilots in the last few years to low-cost rivals easyJet and Norwegian Air.