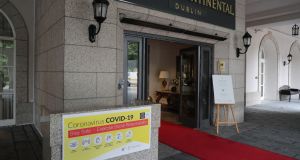 About 18,320 new hotel rooms are in the planning system. Photograph: Nick Bradshaw

Many of the raft of new hotels that were in the planning system before the pandemic hit are now considered “unfeasible” and may never be built, according to one of the country’s top commercial property agencies.

Isobel Horan, a divisional director with Cushman & Wakefield, told a hotel industry online event on Monday that the agency was aware some developers of hotels were beginning to “look at other options” for sites that were previously earmarked for hotel development.

“What we are seeing with hotels that have applied for planning or have their final grant is that some of them are becoming a little bit unfeasible,” she told the webinar, organised by Bank of Ireland.

She said some property developers were now weighing whether to target different parts of the economy, with the hospitality industry reeling from the pandemic and expected to be among the last sectors to recover.

About 18,320 new hotel rooms are in the planning system. Of those, 6,223 have their final planning permission, while 5,832 are under construction, albeit completion dates have been pushed out.

Cushman & Wakefield estimates that about 1,920 rooms have already been deferred by developers. It is likely that this number will grow as developers scout other opportunities for sites.

The overall hotel market has “stalled”, the webinar heard. Just one new hotel has opened this year, the Hard Rock in Dublin, which opened in February on the same week that the first known coronavirus infection was confirmed in Ireland.

There have been just five sale transactions this year, worth a total of €124 million, about €35 million of which is sale agreed, as international investors that have traditionally been active in the Irish market adopt a wait-and-see approach. Last year there were 20 hotel transactions, worth €583 million.

Overall Cushman & Wakefield estimates that the value of economy hotels has fallen 15-20 per cent, while higher-end hotels have witnessed valuation falls of 20-30 per cent, although with such a low level of transactions, the valuations are gauged on sentiment and are materially uncertain.

Ms Horan told the webinar that Cushman & Wakefield was aware of several large international hotel chains that still retained an interest in the Irish market, including EasyHotel, which was founded by Stelios Haji-Ioannou, who founded easyJet, and the boutique British chain Qbic Hotels.

The webinar also heard from Sarah Duignan, director of client relationships with market intelligence group STR. She said its research showed midscale and economy hotels performed better than upscale properties during the pandemic.

Year-to-date average room occupancy in the sector ranges from 32 per cent in Dublin to about 45 per cent in Cork and Galway, she said. The industry will “plateau” until early next summer, before occupancy picks up to above 60 per cent (it was above 90 per cent at the peak of 2019).

Ms Duignan predicted a full recovery would not materialise until 2024.