Prices start at €38,900 but the latest Swedes faces stiff competition from premium rivals in an already (over)crowded crossover market

Can a compact premium SUV be a success in the Irish motor market? We take the Volvo XC40 out for a test drive to find out. Video: Neil Briscoe 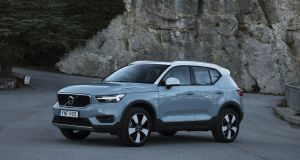 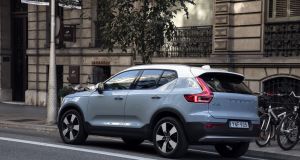 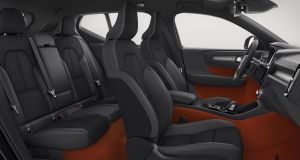 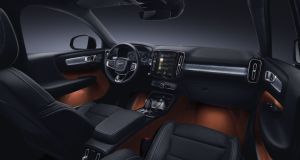 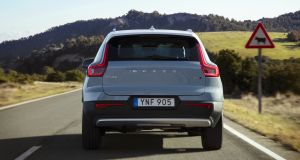 Another week and another premium brand’s baby SUV takes to the road. Car firms are going crazy for crossovers these days, due largely to unmet consumer demand. Instead of spending €40,000 or more on a premium saloon, buyers seem mesmerised by mock off-roaders. To name but a few, we currently have the Audi Q3, BMW X1, Jaguar’s new E-Pace, and the Range Rover Evoque. So what of the latest addition to the baby crossover car park, Volvo’s XC40?

The ambition is funky, the reality more chunky. Styling is certainly a talking point: this is a noticeable detour from the elegance of its two other recently launched SUVs.

All these crossovers seek the imprimatur of youth and street cred, the Holy Grail of the marketing world. Alas, the reality is that, certainly in the Irish market, the hippest of hipsters don’t have two fair-trade coffee beans to rub together. Even if they did, it’s hard to see them dropping €40,000 or more on something as suburban as a new Volvo - or Audi, Mercedes, BMW for that matter.

In reality these cars are going to be bought by your average small family or so-called empty nesters - couples without dependent children draining their resources. The good news for Volvo is that these punters love a bit of street cred. They like associating with products which project a message that beneath that Marks and Spencer thermal vest beats the heart of a hipster. That’s the magic of marketing.

Beauty is in the eye of the beholder, but the change in design direction with the XC40 is an odd move for a brand that only recently re-invented itself. One of the senior members of Volvo’s design team told The Irish Times the firm didn’t want to merely create a smaller version of the XC60, but offer something more fun and youthful. That’s understandable, but is it really time to rewrite the script at this relatively early stage of the brand’s renaissance? We are, after all, only three models into the new family look, developed under its new Chinese owner Geely Auto.

While the XC40 is distinctly a Volvo from the front - and arguably from the rear - the most eyecatching feature from the side view is the big rear c-pillar. It combines with the sharp rake in the window line obscures the side view for passengers and inhibits the driver’s rear vision. Perhaps the best thing to say about the styling is that it may take time to establish itself. It bears some resemblance to some mainstream Asian rivals, important for a brand with eyes to important Chinese sales, not to mention a Chinese owner.

Like many of the new small crossovers, colour choice is key: hence the move by many brands to opt for bold colours and two-tone roof combinations.

The constant quandary for crossovers like the XC40 is maintaining the pretence of premium while meeting the tight cost criteria. The more a car firm moves towards the mainstream market, the more price conscious the customer base.

Volvo could afford to splash out on high tech features and top-level trim for its XC90 range where prices are firmly above €60,000, but you need to start penny pinching when the consumer’s budget won’t stretch far over €40,000.

There are some shared features in the car that makes it distinctively part of the new Volvo family .The 9-inch Sensus touchscreen is a Volvo trademark these days, as are the long vertical air vents and the ultra-ergonomic seats. Volvo still set the benchmark when it comes to comfortable seating and there is no issue with adults in the rear.

Presenters at the launch were particularly proud of the car’s new functionality, that include features like a little wastepaper bin in the centre armrest that can be removed and emptied, and side door pockets big enough to fit a laptop.

There’s also a hook that can be popped out of the glovebox, to hang takeaway bags on your way home. Yet for all this neat little tricks, the bootspace is smaller than its new arch-rival the Jaguar E-Pace or the BMW X3 or Range Rover Evoque for that matter, and despite all the touchscreen tech up front, it’s missing a USB plug point in the rear.

With five engine options on offer when the car is fully launched, we got to test both the 247bhp T5 petrol and the D4 190bhp twin-turbo diesel. Both engines are 2-litre four-cylinder units, mated with eight-speed automatic transmission and all-wheel drive. The diesel seems noisier than its rivals, particularly when asked to perform at higher revs, but the petrol engine has impressive pep in its step.

A smaller petrol engined T3 156bhp is due to arrive in Ireland early next year and will be the entry-point for the XC40 range, with front-wheel drive and six-speed manual transmission. A T4 petrol 190bhp automatic all-wheel drive will also be introduced, as will a 150bhp D3 diesel front-wheel-drive in manual or automatic.

This will also be offered in all-wheel drive. Later in the lifecycle we can expect to see a new 1.5-litre three-cylinder 120bhp petrol introduced, which will bring the entry price down further. Finally, you can be sure there will be some form of plug-in hybrid or full electric version on offer later, though Volvo would not confirm details as yet.

The car itself is built on the firm’s new CMA platform, another reason perhaps why they opted not to merely create a miniature XC60. This is the second platform developed by Volvo since it was taken over by the Chinese firm. The larger SPA platform is the basis for the larger XC90 and S90 models.

This platform will go on to underpin other small and medium cars from the brand, such as the new V40, and it will also be shared with Geely’s new Chinese brand, Lynk & Co. First impressions are that the CMA is a very tidy package, and while most crossovers can’t match the handling sharpness of a well-grounded hatchback, it’s amongst the more agile and adept of these cars on the market. The steering feel, in particular, is much sharper and responsive than on the rest of the Volvo range at present.

As with other models, there is the option of adjusting the responsiveness of steering, brake feel and throttle response via the Drive Mode settings, which offers Eco, Comfort, Dynamic or Off-road settings.

Volvo had tripped itself up of late by launching the XC60 at the higher end of its price range. It meant that many potential buyers have baulked at the price jump over the old model and ruled the car out of consideration.

It’s true that in reality many crossover buyers don’t leave an Audi or BMW showroom without spending a similar sum, but to get them in the door, the entry price has to be competitive. Volvo will have a new entry price for XC60 when the manual front-wheel drive version arrives next year, but it will have lost many buyers to rivals by that stage.

Perhaps this is the reason why Volvo has confirmed pricing for the entry level XC40 T3 petrol front-wheel drive manual version, ahead of its actual market introduction. The message is that the XC40 will start at €38,900, not €47,450 - the entry price for the D4 diesel all-wheel drive automatic, which is the first variant to arrive in Irish showrooms.

The XC40 brings Volvo to the baby crossover party, so it’s a sensible business move for the Swedish brand. The car delivers in terms of driving dynamics, at least compared to other crossovers. However, the styling lacks the elegance of Volvo’s new car range, and inside it lacks the refinement of its larger siblings as well. Playing the funky card only gets you so far. For €40,000-plus, consumers could drive away from many showrooms with a more premium-packaged saloon or mainstream SUV.

Volvo is setting the pace of the car industry in so many ways these days, trailblazing the future of autonomous driving, new ownership models and mobile technology. With a strong heritage of safety, it’s in the ideal position to take a lead on new technology at a time when trust in a brand’s reputation will be more important than ever. Volvo is part of the pioneers in a major revolution in motoring that’s far more significant than the arrival of this little crossover, chunky as it is.

Has your sense of smell changed recently?
Real news has value SUBSCRIBE