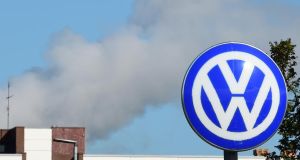 Nurse Eithne Higgins took the case against VW over the emissions problem.

A woman’s action arising from the Volkswagen car emissions scandal should not be further heard by Judge Mary Devins at Castlebar District Court for reasons including lack of fair procedures in dealing with pretrial issues, the High Court has ruled.

Eithne Higgins’s case should instead go before a different judge at Castlebar District Court who must first decide whether that court has jurisdiction to hear the case, Ms Justice Úna Ní Raifeartaigh ruled.

The transcripts of pretrial proceedings before Judge Devins suggested “a certain level of hostility” towards Volkswagen and its legal team, “perceived as Goliath flanked by his expensive Dublin lawyers”, appeared to have contaminated the district court proceedings to date and led to hearings “not in accordance with fair procedures”, she said.

She also quashed an order made by Judge Devins that required Volkswagen to discover additional documents sought by Ms Higgins’s side.

That order was made on September 6th, 2016, after Judge Devins heard evidence from witnesses in the absence of Volkswagen’s lawyers, who had walked out after contending the District Court had no jurisdiction.

In her action, Ms Higgins, a nurse, of Boyle, Co Roscommon, claims a 2010 Seat Leon purchased second-hand by her from a garage in Ballyhaunis, Co Mayo, is among the estimated 11 million cars worldwide affected by the emissions problem. She is claiming loss and damage in sums to be ascertained, including for any amounts which may be due for motor tax.

In its High Court case, Volkswagen insisted it was not trying to stop Ms Higgins litigating but that Dublin District Court was the appropriate venue for hers and other cases initiated here against it arising from installation of so-called cheat devices designed to mislead US emissions tests. It particularly objected to Judge Devins dealing any further with the case.

She was satisfied, for reasons including delays between pretrial hearings, that Judge Devins had misremembered what had happened on the first date, May 27th, at the end of which she effectively deferred ruling on jurisdiction. On September 6th, Judge Devins described herself as having already decided the jurisdiction issue on May 27th when she had in fact fixed September 16th to hear the motion on jurisdiction.

She suspected the root of the confusion was because jurisdiction was one of two different issues raised before Judge Devins on May 27th and she ruled on the second issue, refusing Volkswagen’s application to have the emissions cases referred to one judge, the judge said.

She found comments by Judge Devins during the September 6th hearing had unfortunately created a situation where it would not be unreasonable for Volkswagen or a bystander to have a concern about her ability to detach herself from her previous ruling.

While she believed that if Judge Devins was permitted address the jurisdictional issue she would do so in an “entirely professional and impartial” manner, it seemed, in this case, “a line had been crossed, albeit through error”, which made it preferable another judge would rule on jurisdiction.

The judge also found a breach of fair procedures in how the September 6th hearing had been allowed proceed.

The “extraordinary procedure” meant something that started as a discovery application had developed into a “mini-trial” of the issues, she said.

It was intended a Volkswagen witness who had sworn a statement of discovery was to be cross-examined not just on the adequacy of discovery but the subject matter of the action. While that witness did not attend due to Volkswagen’s claim that the court lacked jurisdiction, other witnesses were called, including a scientist to talk about the emissions and an economist to talk about loss.

8 Garmin Enduro: Built to last and crammed with features