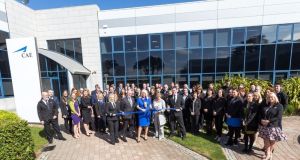 Then Minister for Jobs Mary Mitchell O’Connor opening CAE Parc Aviation’s offices. The company is a global leader in providing aviation personnel to airlines and provides recruitment services to 70 clients in more than 60 countries

Accounts recently filed for Parc Aviation Ltd show that pre-tax profits increased as revenues rose by 7 per cent to €134.5 million in the 12 months to the end of March last.

CAE Parc Aviation is a global leader in providing aviation personnel to airlines and provides recruitment services to 70 clients in more than 60 countries. It is in the process of adding 80 jobs in Dublin and Shannon over a three-year period.

According to the director’s report, the company recorded an increase in the volume of business, resulting in an increase in gross profit. The directors state there was heavy investment in overheads to enable the company to continue this growth in future years to meet customer demands.

On its future outlook, the directors said the company plans to expand through a mixture of new clients and increased product offerings.

Parc paid a dividend of €4 million to its parent last year, up from a payout of €3 million in the previous year.

Accumulated profits at the end of last March totalled €7.9 million while shareholders funds amounted to €8 million. The company had €5.7million of cash at the year end.

The company’s net operating costs of €132 million were last year made up of €122.28 million in contractor costs, €6 million in staff costs and €4 million in other charges. The directors shared €588,000 in remuneration last year.