Mediation between Ryanair and pilots group to resume on Friday 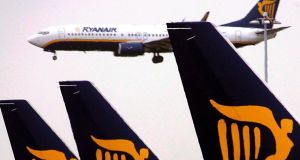 Negotiations between Ryanair and Ialpa are set to resume on Friday as the sides continue to seek an end to the deadlock that has led to five one-day strikes at the airline. Photograph: Andy Rain/EPA

Mediation aimed at resolving the long-running dispute between Ryanair and a group of Irish-based pilots will restart on Friday.

Negotiations will resume on Friday at Dublin Airport between Ryanair and the Irish Airline Pilots’ Association (Ialpa) – part of trade union Fórsa – as the sides continue to seek an end to the deadlock that has led to five one-day strikes at the airline.

About 100 of Ryanair’s 350 Irish-based pilots have been in dispute with the company over base transfers, promotions, leave and other issues tied to seniority since early July.

Mr Mulvey stepped in as mediator following a proposal by Ryanair that Ialpa-Fórsa accepted.

Talks began on Monday and ran for three days. Both sides have agreed not to make any public comment while mediation is under way.

Pilot unions in Belgium, Holland, Germany and Sweden are also in dispute with Ryanair and staged a one-day strike last Friday alongside Ialpa-Fórsa.

None of those organisations indicated on Thursday that they intended staging further stoppages in coming days.