Ailing Connemara Airport to be purchased by the State 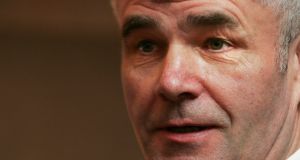 The State is to buy Connemara Airport from the entrepreneur and senator Pádraig Ó Céidigh, the Government has decided.

The Cabinet meeting on Tuesday was updated by the chief whip and Minister for the Gaeltacht Seán Kyne on plans to purchase the airport. The Irish Times understands a deal was agreed in principle last week.

A spokesman for the Minister said the contracts were being examined by both parties and “all going to plan the sale should be concluded within the next fortnight”.

Mr Ó Céidigh did not wish to comment on Tuesday night, due to a confidentiality agreement, but confirmed that discussions had taken place over some time. The price was not disclosed by either the Government or Mr Ó Céidigh, though Mr Ó Céidigh has said that he was prepared to sell at a “fair and reasonable price”.

The purchase of the airport at Inverin – which serves flights to the Aran Islands – by the State has been discussed over several years.

In September, the Government agreed to extend an existing public services contract with Aer Arann – which is also owned by Mr Ó Céidigh – for the provision of air services to the Aran Islands from the airport.

However, the service has been dogged by questions over its future in recent years, with the airline saying that it cannot run the service on the current subsidy of €800,000 a year.

During high season in the summer, the airline provides up to 30 flights a day for tourists, but that falls to the bare minimum during the winter when the service is used primarily by islanders.

The public subsidy requires the airline to provide 3,500 flights each year to Inis Mór, Inis Meáin and Inis Oírr on a fixed schedule.

Galway Aviation Services Ltd, trading as Aer Arann Islands, has claimed the terms of the contract, which is almost two years through its four-year term, are too onerous. The airline says it faces deductions from allowances if it provides extra flights or departs from schedule.

The 2017-2020 contract covers about 3,500 annual flights between the three Aran Islands and Connemara Airport at Inverin/Indreabhán.The service has carried 42,000 people annually at peak, but this figure has fallen to just over 30,000.

1 Businesses call for more supports amid ‘devastating’ restrictions
2 Ryanair and Eir the worst for customer service during Covid crisis
3 Irish elearning company LearnUpon closes €47.4 million investment
4 Economists warn that GDP will fall again over Level 5 restrictions
5 Fair deal? Family at odds with hospital and each other not so sure
6 What to consider if older person or loved one needs care at home
7 ‘Essential’ retailers risk a firestorm if they exploit the closure of the ‘non-essential’
8 Aldi to impose limits as Christmas toys go on sale
9 PlanNet21 eyes further acquisitions after buying rival eCom
10 Glenveagh attracts growing hedge-fund interest
Real news has value SUBSCRIBE