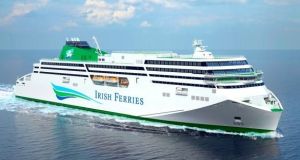 Irish Ferries carried 370,700 cars in the first ten months, an increase of 1.6 per cent on the same period a year earlier

Revenue at Irish Continental Group rose by 8.2 per cent to €308.8 million in the first 10 months of the year.

In a trading update, the group said higher turnover was achieved across all it businesses, with its ferries division performing particularly strongly, with revenues up 7.1 per cent at €184.3 millio.

Irish Ferries carried 370,700 cars in the first 10 months, an increase of 1.6 per cent on the same period a year earlier. These volumes were achieved against a decision to suspend sailings on the tourism oriented fastcraft during the low tourism winter season.

Total revenues in ICG’s container and terminal division for the first ten months amounted to €131 million, a 9.1 per cent increase on the prior year.

ICG said during the ten months to the end of October, it returned over €26 million to shareholders and invested in excess of €25 million in expanding and improving its fleet.

Net debt at the end of October was €118.8 million, the company said.