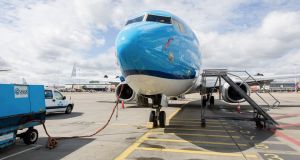 The Dutch government on Friday said it would provide Air France-KLM’s Dutch subsidiary KLM with a €3.4 billion financing package

The Dutch government on Friday said it would provide Air France-KLM’s Dutch subsidiary KLM with a €3.4 billion financing package to help it survive during the coronavirus pandemic.

Finance Minister Wopke Hoekstra said the package would consist of €2.4 billion in bank loans with guarantees, and a €1 billion direct loan.

“This package is needed to make sure that KLM and Air France can continue to fulfill the important role that they have in our economy,” Hoekstra told a news conference in The Hague.

“In the past weeks we have tried to divide the pain as fairly as possible,” he said.

Pilots will have to take a pay cut of up to 20 per cent, and the company as a whole will have to cut costs by 15 per cent. There was no word on layoffs, which are expected, but Hoekstra said some cuts are inevitable to KLM’s staff of some 30,000.

The state support must still be approved by the European Union, but Ryanair chief executive Michael O’Leary has called on it to block the subsidy.

“Sixteen years after Air France’s takeover of KLM, every Dutch citizen now has to pay €200 each to prop-up Air France-KLM, while each French citizen will only pay a subsidy €100,” he said.

“This is a poor deal for the trading nation, which likes to lecture other EU countries about fiscal rules but has no problem breaking these rules when it comes to subsidising KLM.

“This Dutch government subsidy is also bad news for competition and consumer interests as it will further delay the necessary reforms at the bloated Air France-KLM.

“We call on the European Commission to block this subsidy doping to KLM, which will further reduce competition and consumer choice in the Dutch and French markets.”

The Dutch parliament sought several conditions in return for the use of taxpayer money, including fewer night flights and a 50 per cent reduction in carbon dioxide emissions by 2030.

The government will appoint a “state agent” to KLM’s board in order to ensure that the financial support funded by taxpayers is spent exclusively on Dutch operations.

The French and Dutch governments remain at loggerheads over management and strategy at Air France-KLM, created by the 2004 merger between the two national carriers.

In March last year the Dutch state took a surprise 14 per cent stake in the group to match France’s 14 per cent holding and counter its clout. – Reuters