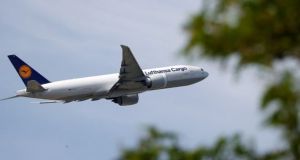 Lufthansa employs around 138,000 people and owns brands including Eurowings and Austrian Airlines

Lufthansa’s shareholders have voted through a €9 billion bailout package that gives the German government a stake in the group almost a quarter of a century after it was first privatised.

The deal, which allows Berlin to raise its holding to a blocking minority in the event of a hostile takeover bid, had been in jeopardy after the airline’s largest investor, billionaire Heinz Hermann Thiele, indicated that he wanted to reopen negotiations with Angela Merkel’s administration.

However, Mr Thiele, who built a 15.5 per cent position in the airline in the months following the Covid-19 outbreak, and could have single-handedly blocked the bailout because of the low turnout at Thursday’s extraordinary general meeting, ended up supporting the package.

Overall, more than 98 per cent of those registered voted to approve the bailout.

In his opening remarks at the meeting, chief executive Carsten Spohr defended the size of the deal, which he previously said was larger than the amount Lufthansa needed to avoid insolvency.

“Viability is the sum of competitiveness plus ability to invest,” the former pilot said.

Mr Spohr also said the German carrier, which had been burning through €1 million an hour as most of its planes remained grounded, had “no alternative for meeting our capital requirements”, and reiterated that Lufthansa will emerge from the crisis a smaller group, with at least 100 fewer aircraft.

Rival airline Ryanair has vowed to challenge the bailout in court.

The success of the bailout vote is a blow to a number of US and UK hedge funds, which had stood to profit if the rescue package was scuppered.

Andreas Halvorsen’s Viking Global Investors, Steve Cohen’s Point72 Asset Management and Paul Marshall’s Marshall Wace are among those that have been running bets against the carrier, which is one of the three most-shorted stocks in Germany, according to data group IHS Markit.

Hedge funds piled into bets against Lufthansa in mid-March, as lockdowns in the world’s big economies forced airlines to halt most flights and a number of them to request government help.

Some traders expected the bailout to weigh further on the share price as it would dilute the shares. Short bets reached an all-time high of 80 million shares on loan in late May, according to IHS Markit, just after the rescue package was announced.

“The equity will be diluted as the share count will go up,” said one short seller. “Once you take money from the government, it’s like taking money from the devil - if you make exceptional profits they will take it back off you, look at the banks [after the credit crisis].”

Earlier on Thursday, the European Commission approved the aid package, and competition chief Margrethe Vestager defended the body’s decision to force Lufthansa to give up lucrative slots at its hub airports in Munich and Frankfurt.

On Wednesday night, Lufthansa, which includes the Eurowings, Brussels, Swiss and Austrian Airlines, reached a deal with the independent flight attendants union UFO, securing savings of more than half a billion euros through measures including the suspension of pay increases.

Mr Spohr said the group was also on course to reach a deal with the pilots’ union, but added that negotiations with services union Verdi remained “disappointing”. – Copyright The Financial Times Limited 2020