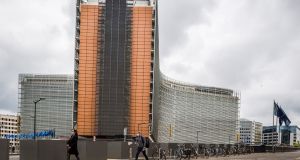 The Berlaymont building, which houses offices of the European Commission, in Brussels, Belgium.

Portugal’s flag carrier TAP is confident the European Commission will approve a restructuring plan that would allow the airline to avoid repaying a government-backed loan, its chief executive said on Tuesday.

In April, TAP asked for help as the company, which usually operates around 2,500 flights per week, was forced to suspend almost all of them as demand for travel collapsed in the coronavirus pandemic.

Rescue aid can be granted for a maximum of six months and authorities have committed that TAP will reimburse the loan or submit a restructuring plan in that time.

“We believe it is possible to send a restructuring plan to the European Commission that is accepted because we believe TAP has a viable business model,” CEO Antonoaldo Neves told a parliamentary committee.

“TAP has new planes, it has an extraordinary team,” Neves added. “Now it will be a long and hard recovery.”

TAP tried to resume some of its international operations last month as lockdown measures were slowly being lifted but, with little demand, the company took a step back.

“It is very difficult to predict the demand we will have in coming months,” Neves said. “We have done a process in which we place flights and withdraw flights, testing market demand.”

TAP was partly privatised in 2015. Brazilian-US airline entrepreneur David Neeleman holds a 45 per cent stake, and the state 50 per cent, with TAP employees holding the remaining 5 per cent.

TAP ended last year with its best ever cash position despite a net annual loss of €106 million, but it has incurred heavy losses in recent months.

“The country must unite to save TAP from the pandemic,” Neves said. – Reuters

1 More than 40% of help-to-buy recipients already had deposit
2 Most workers now expect choice to work from home part-time
3 PTSB slides into loss amid €75m bad-loans charge
4 Elderly parents living in property you own will save you on capital gains tax
5 Owner of Dundrum Town Centre to sell prized assets
6 56 financial firms entered or expanded Irish operations in 2020
7 Cinema tensions laid bare by deep crack in theatrical release windows
8 Pilita Clark: Working from home is starting to pall
9 New car sales down 14% in July
10 It is never too early to talk about saving for Christmas
Real news has value SUBSCRIBE