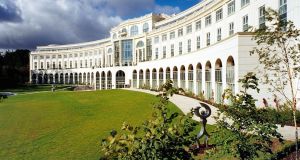 The five-star Powerscourt Hotel originally opened as a Ritz Carlton.

A group that includes US cable television tycoon John Malone has agreed a deal to buy the five-star Powerscourt Hotel in Enniskerry from a company controlled by Tetrarch Capital for more than €50 million.

MHL Hotel Collection, a joint venture between Mr Malone, Irish property developer John Lally and Down businessman Paul Higgins, will add the Powerscourt Hotel to its portfolio of 11 properties, which also includes the Westin and Intercontinental hotels in Dublin city.

MHL – named after the surname initials of its three partners – this month set up two new companies to complete the Powerscourt deal: Enniskerry Ventures and Wicklow Leisure Investments.

The sale of the hotel by Tetrarch-controlled Sugarloaf Ventures is subject to approval by the Competition and Consumer Protection Commission.

MHL would not comment on the price paid for the property but several informed sources said the transaction was completed at between €50-€60 million.

MHL has emerged as a major player in the Irish luxury hotel market, especially in Dublin. The group’s 2018 revenues, it says, were more than €150 million and even before the Powerscourt deal it had almost 1,900 bedrooms.

In addition to seven Dublin hotels, it also owns three hotels in Galway and one in Limerick.

The Powerscourt Hotel was lavishly developed at an estimated cost of €120 million at the tail end of the last economic boom by Johnny Ronan and Richard Barret’s Treasury Holdings and originally opened as a Ritz Carlton.

The loans on the hotel were moved to Nama during the crash, and a consortium led by Tetrarch’s principal, Michael McElligott, bought it from the State agency in 2013 for a knockdown price believed to be just a few million euro.

The near 200-bedroomed hotel is built on a valley site just off the main avenue that runs through the estate to Powerscourt House in the Wicklow village of Enniskerry.

The hotel employs about 320 staff, who were told of the sale on Wednesday afternoon. The latest accounts for Sugarloaf Ventures show the hotel had 2017 revenues of more than €21 million, while occupancy was above 70 per cent.

The hotel has become a favourite location for celebrity weddings in recent years, hosting the nuptials of former Ireland football star Robbie Keane and Claudine Keane, as well as the wedding of his team mate Shane Long, and also the wedding of golfer Shane Lowry.

Tetrarch, which last year did not proceed with a mooted public listing due to roiled markets, owns or manages a broad range of assets in the hospitality sector, such as the Citywest Hotel in Dublin and Mount Juliet Estate in Co Kilkenny.

Irish-American billionaire Mr Malone, meanwhile, has been on a spending spree in this State in recent years.

He has helped to finance the acquisition, in conjunction with Mr Lally and Mr Higgins, of a swathe of Irish property assets in recent years, including several country estates such as Castlemartin, the former Kildare home of former billionaire Tony O’Reilly.

Mr Malone accrued most of his wealth from his control of global cable giant Liberty Global, which owns Virgin Media, the Dublin television channel formerly known as TV3.

1 Bank leaked my loan request to family who tried to rip me off
2 Ryanair and Aer Lingus monitor impact of coronavirus on travel to Italy
3 Boris Johnson's new immigration regime will damage much more than industry
4 Exposed to coronavirus: How Irish business is coping with fallout
5 Mastercard to create 1,200 new jobs by expanding base in Dublin
6 How social media platforms battle misinformation while profiting from it
7 Dr Pepper owner in talks to take over former Lidl distribution centre
8 Facing the music: how China is buying Germany’s piano industry
9 Knock gets visit from world’s largest passenger plane
10 Help, I’ve no PRSI stamps – can I still get a pension?
Real news has value SUBSCRIBE