Hotel construction ramps up with 3,900 rooms being built

Most new rooms in Dublin, as capital to see uptick in hotel sales to overseas investors 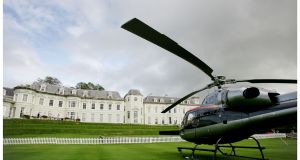 The K Club in Co Kildare is on the market for €80 million. Photograph: Alan Betson/The Irish Times

Some 3,882 hotel rooms were under construction across the country at the end of last year, a rise of 70 per cent on the same period of 2017, data from real estate agency Cushman and Wakefield shows.

Development activity remained the predominant focus of the market in 2018, with a little over 1,300 rooms delivered across 21 hotels during the year. The vast majority, almost 1,000, were in Dublin across 13 properties.

In the final quarter of the year, there were two significant openings – the 181-bedroom Clayton Hotel in Dublin 2 and the 165-bedroom Maldron Hotel in Cork city.

Additionally, the four-star, 40-bedroom Devlin Hotel in Ranelagh opened in the period. The Devlin has since been offered for sale off market with a guide price of about €22 million.

Of the new rooms under construction, 87 per cent were in Dublin, including a new eight-storey Travelodge in Dublin 2 and Motel One in Dublin 1, providing 393 and 310 rooms respectively.

“There is still a large volume of national and overseas capital seeking investment in Irish hotels, particularly demand from Irish buyers has grown. However, options were limited in 2018. We do envisage an uplift in transaction levels for 2019,” said Isobel Horan, an associate director of trading assets at Cushman & Wakefield.

The decline in the sales volume is likely linked to the drying up of distressed assets. Between 2014 and 2016, distressed asset sales characterised the market but during 2018, transactions consisted of mainly small assets. Just one hotel, the Hilton Dublin Airport, at €22.5 million, broke the €20 million mark in terms of value.

In 2019, Cushman and Wakefield anticipates stronger transaction levels given a number of hotels already coming to market. Those include the five-star K Club resort in Kildare, on the market for €80 million, and the five-star Druids Glen Hotel and Golf Resort, which is quoting €45 million.