Italians turning to Ryanair as Alitalia files for bankruptcy

Irish operator picking up passengers along with Vueling and Easyjet 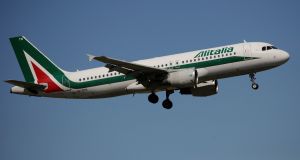 Should Alitalia go, Italy would be the only big EU state without a national carrier. Photograph: Max Rossi/Reuters

If Alitalia’s bankruptcy spells the end for the airline, Italians may well be able to turn to Ryanair, or possibly some of its rivals, as an alternative. Figures produced by industry newsletter, Anna Aero, show that the Irish operator, along with the likes of Vueling and Easyjet, has mopped up traffic in Italy.

Ryanair will have 20 per cent of Italy’s international market this summer, making it by far the biggest player in that end of the business. The next nearest is Easyjet, with 11.5 per cent, while Alitalia comes third with 8.6 per cent. Vueling is fourth with 4.8 per cent.

This does not compare well with the performance of other European flag carriers in their home markets. Lufthansa, for instance, will have 27 per cent of international capacity from German airports this summer, while Air France will have 24 per cent.

Ryanair already has a big presence in Rome Fiumicino Airport, where it has been building business as Alitalia rolled back. It also has a base at Milan Malpensa. By last autumn, it was Italy’s biggest airline. Its willingness to compete also forced other rivals, including Vueling, to cut capacity.

While no-one seems to believe that Alitalia will go under – the Italian government has given it a bridging loan – if it were to go, there are plenty of airlines ready to soak up the capacity.

Ryanair’s willingness to move quickly to cash in on opportunities would allow it to further consolidate its position in a market with 160 million passengers. It could also offer some transatlantic connections if it were to agree a deal with Norwegian Air International.

The real issues though its this. Should Alitalia go, Italy would be the only big EU state without a national carrier. If this were to happen and private sector airlines were to quickly fill the gap, it would beg the question: Do we really need “national airlines” any more?