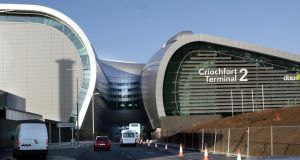 It looks like a third terminal at Dublin Airport is a lot further down the road than some recent speculation would have you believe. Since November last year, when Minister for Transport Shane Ross said he would get experts to look at the feasibility of getting the private sector to run terminal three, there has been a growing sense that it would happen sooner rather than later.

However, the review Ross proposed was meant to look at likely demand on the Republic’s airports between now and 2050, so it did not follow that terminal three is just around the corner. This week, Kevin Toland, chief executive of DAA, the State company responsible Dublin and Cork airports, said a new terminal was not a priority.

Dublin is already working on a new runway and still faces potential battles with locals over planning conditions and customers such as Ryanair and Aer Lingus over the estimated €320 million cost. That, and work on existing airport facilities designed to ease congestion a specific pinch points, is much more a priority than a facility for which demand has yet to materialise.

Ross’s proposal regarding private sector involvement in a third terminal echoed a suggestion in a report last year that this could be one way of tackling Dublin Airport’s dominance. About 32 million passengers used the Republic’s airports last year; almost 28 million came and went through the capital’s gateway.

Dublin had more than 10 times the passengers that passed through the State’s second-biggest airport, Cork, which catered for 2.2 million travellers last year. Putting it another way, Dublin’s growth in 2016 was close to three million passengers (it handled 25 million people in 2015), while Cork’s total traffic was 2.2 million.

It is clear that the capital’s airport is going to be bigger than those serving areas with smaller populations. The question is whether the gap should be as big, and whether it is feasible for the likes of Cork and Shannon to take a bigger slice of the cake.

It would make more sense to tackle those questions now rather than simply deciding that a third terminal for Dublin Airport is an automatic next step for the State’s aviation infrastructure.