Who will get what in the Mercantile divorce? 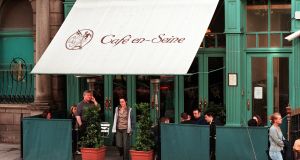 Cafe en-Seine: It’s a fair bet that this will go to Danu Partners and its US backers. Photograph: Cyril Byrne

Could this be known as Barexit?

A little over a year after they merged their respective pub groups, the peace deal between Mercantile publican Frank Gleeson and his fellow warring shareholders will see the group split between both sides.

Mercantile will be split – if not in half – certainly in two. So, between Gleeson and the Capital Bars tribe, who will get the juicier chunk?

The conjoined Mercantile/Capital Bars group includes hostelries that are among the biggest money-spinners in their sector. The terms of the deal are unknown so far, but Gleeson has claimed ownership of about 30 per cent. Presumably, he has had to give a little on that to get a deal. Might he walk away with a fifth of the net assets? What might a fifth of the Mercantile group look like?

Cafe En Seine is the archetypal “super pub” from the frothiest days of the last boom. It is the size of a small country, and probably turns over the GDP of one. Legend goes that some revellers have taken days just to come back from the toilet, the place is that cavernous.

It is also the financial linchpin of the Capital Bars side of the house. It is unlikely that Gleeson will get, or would want, this massive beast in the divorce. It’s a fair bet that this will go to Danu Partners and its US backers.

Then you have Whelan’s and Opium on Wexford Street, another two of the biggest pubs in Dublin city. Both pubs have been at the heart of Gleeson’s empire for years. He knows the staff, the managers – Gleeson knows their soul.

They are probably worth more to him than to Capital Bars. Gleeson has likely fought tooth and nail to hang on to these pubs.

It’s a toss up who will gain the eateries, such as Pichet.

But the real jewel of the group is the Mercantile hotel on Dame Street. The group is planning a major extension of the property, and if Gleeson hangs on to this in the divorce, he will have done exceedingly well.

The fate of the Mercantile hotel could well be central to this Barexit.