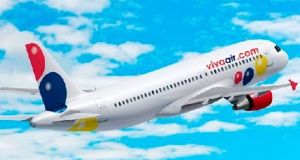 Viva Air, the low-cost South American-focused carrier established by the family of Ryanair founder Tony Ryan, is targeting a huge jump in passenger numbers ahead of a possible flotation.

The airline, which is owned by the Dublin-headquartered Irelandia Aviation, has announced a closer integration of its two airlines, which will both now be named Viva Air and shall operate under a single website.

Viva Air chief executive Felix Antelo said the airline is projecting passenger growth of more than 100 per cent in Peru next year with Colombian traffic forecast to rise by 34 per cent versus 2018.

The airline, which has long been reported to be considering expanding to other Andean states, including Ecuador and Argentina, is eyeing an initial public offering (IPO) within two years.

VivaColombia (now Viva Air Colombia) began operations in 2012 with Irelandia Aviation as its stake rose from 25 per cent to 75 per cent. The airlines currently flies to 11 domestic locations as well as flights to the US, Ecuador, Panama and Peru.

Irelandia has had a highly successful track record of investing in low-cost carriers that include Allegiant in the US, Tigerair in Asia and , Viva Aerobus in Mexico. The group sold its 49 per cent stake in Viva Aerobus in November 2016.