Ex-Volkswagen boss Winterkorn charged in US over diesel scandal 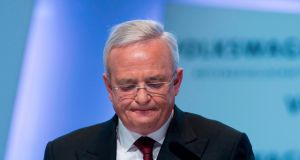 The US justice department on Thursday disclosed the filing of criminal charges against former Volkswagen chief executive Martin Winterkorn, accusing him of conspiring to cover up the German carmaker’s diesel emissions cheating. The indictment, filed in secret in March, was unsealed in US district court on Thursday as Volkswagen held its annual meeting in Germany.

Mr Winterkorn resigned days after the scandal over polluting vehicles in the United States became public in September 2015. US Attorney General Jeff Sessions, Environmental Protection Adminstration chief Scott Pruitt and other senior Trump administration official issued statements criticising VW with the indictment, which marks a rare instance of a chief executive being subjected to criminal prosecution for corporate behavior.

“If you try to deceive the United States, then you will pay a heavy price,” Mr Sessions said. In contrast with Volkswagen, no individuals were charged at Toyota in connection with its sudden unintended acceleration scandal or at General Motors for the cover-up of a deadly ignition switch defect.

The federal government’s decisions not to prosecute senior financial industry executives in connection with the 2007-2009 financial crisis also has drawn fire from advocates of tougher measures to deter corporate wrongdoing.

The US indictment of Mr Winterkorn is likely to be largely symbolic. As a German citizen, he is almost certain not to come to the United States and to seek protection under German extradition law. The former chief executive is also under investigation by German authorities. Volkswagen settled criminal charges with the US justice department in 2017 and agreed to a $4.3 billion payment. In total, VW has agreed to spend more than $25 billion in the United States to address claims from owners, environmental regulators, states and dealers.

The company also has offered to buy back about 500,000 polluting US vehicles. Many are now stored in parking lots around the United States. - Reuters