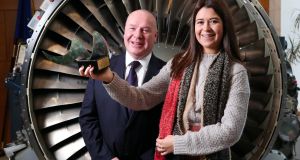 Two aviation students at Dublin City University (DCU)have each been awarded a €5,000 scholarship by the Irish Aviation Authority (IAA) to cover their college fees.

The IAA’s scholarship programme was developed as part of the authority’s commitment to supporting and promoting the growth and further development of aviation in Ireland.

It is named in honour of the late Geoffrey O’Byrne White, an accomplished aviator and a former IAA board member, who died last year.

“Supporting the next generation of professionals to prosper and contribute to the aviation sector is an important part of the authority’s longer-term vision,” said IAA chief executive Peter Kearney.