Ireland’s first easyHotel to open in Belfast in September 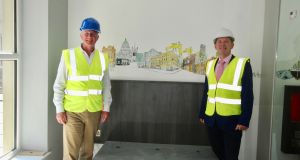 Owner/developer David Crowe with director Kevin Baird: “We believe Belfast is ready for this hotel and this brand”

The first super-budget easyHotel on the island is to open in Belfast in September, it has been confirmed.

The hotel chain is part of the easyGroup founded by Stelios Haji-Ioannou who set up the low-cost airline easyJet in 1995 when he was just 28.

Belfast’s easyHotel is currently under construction and is being developed under franchise by the Northern Ireland businessman David Crowe, who is investing £5 million in the project, and director Kevin Baird.

It will be located just above three restaurants that are owned by the award-winning chef Michael Deane just behind Belfast’s City Hall.

The hotel will have 81 bedrooms across four floors, and also a coffee shop. It is expected to create 30 new hospitality jobs for the city.

According to its developer the easyHotel will operate “just like budget airlines”, with everything done online or on a mobile app.

It will also be one of the first hotels in Belfast to allow guests to use their smart phone to unlock their room without having to check in.

Mr Crowe said: “We believe Belfast is ready for this hotel and this brand. As a super-budget hotel I’m very proud of the quality of this hotel, which will offer rooms at a reasonable price.

“It is perfect for someone who wants a clean and comfortable room, right at the heart of Belfast’s city centre.”

Mr Crowe also believes that the easyHotel’s “straightforwardness, the cleanliness and the cost” will have a wide appeal, particularly to tourists from the Republic and Britain who are coming to the North for one or two nights.