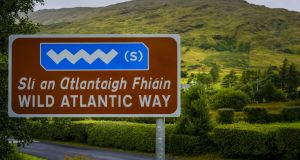 Hotels and guesthouses outside Dublin bore the brunt of last year’s slowdown in tourism growth, according to a leading industry lobby group.

Irish hotels and guesthouses filled 73 per cent of their rooms in 2019, a slight increase on the 72 per cent occupancy rates they experienced the previous year, new figures show.

However, the Irish Hotels’ Federation (IHF) warned that there was a wide gap between hospitality businesses outside the capital and those in Dublin. It noted that growth in the number of holidaymakers arriving here stalled last year.

Speaking ahead of the federation’s annual conference in Galway this week, its chief executive, Tim Fenn, said that the Republic continued to have a two-tier tourism industry, with regions suffering the worst slowdown.

“Dublin continues to perform well with an average occupancy of 82 per cent, down 2 per cent, and this is on the back of an additional 1,300 rooms coming on stream during the year,” he said.

Mr Fenn added that these figures were worrying in light of the significant challenges already facing the tourism business, and the vital role that it played in many regions.

He noted that tourism supported more than 260,000 jobs, almost three-quarters of which were outside Dublin.

Last year it generated €9.2 billion in revenue, around 4 per cent of the wealth produced in the State in 2019.

Mr Fenn acknowledged that attracting 10.9 million visitors from outside the State last year was a strong performance, but said that the lack of growth was a worrying trend should it continue.

“We haven’t regained the ground lost in UK visitor numbers caused by the uncertainty following the Brexit referendum in 2016 and the fall in the value of sterling.”