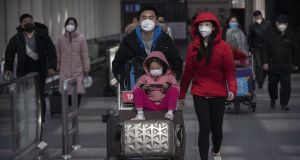 Entry screening has yet to be recommended for Irish airports, none of which have direct flights with China, as several countries begin isolating citizens evacuated from the Chinese city of Wuhan in an effort to stop the global spread of the coronavirus.

While last year the State’s biggest airport did run flights to and from both Hong Kong and Shenzhen, the latter was axed last year while the Hong Kong route will only return in March.

A DAA spokesman said that the HSE’s health protection surveillance centre (HPSC) is the State’s specialist agency for surveillance of communicable diseases. “Given that there are no flights to Irish airports from Wuhan, which is at the centre of the outbreak, in accordance with current World Health Organisation guidance, entry screening is not recommended at Irish airports at present,” the spokesman said.

The extent of the impact on the Irish tourism industry as yet remains unclear from the spread of the virus, but industry leaders have warned that if other markets are significantly affected, there would be cause for concern.

Niall Gibbons, chief executive of the State’s tourism marketing body, Tourism Ireland, noted that Chinese tourists account for about 0.9 per cent of total inbound tourist numbers, “so our level of exposure is nothing compared to other countries”.

However, he said Tourism Ireland’s staff have been advised not to return to Shanghai until at least the 9th of February and a sales mission that was due to go to China at the end of next month has been postponed “as a precautionary measure”.

“In relation to the Irish travel trade we have picked up feedback of cancellations. There are some outlets here that would rely on Chinese shoppers that would see a short term dip,” Mr Gibbons said, adding that some French luxury goods store have seen sales decline by 33 per cent.

Nevertheless, the Chinese market is an increasingly important target for Tourism Ireland, which previously said it plans to double its marketing investment in the country to €1 million to grow Chinese visitor numbers to 200,000 by 2025.

Eoghan O’Mara Walsh, chief executive of the Irish Tourism Industry Confederation (ITIC), noted that while China is an important emerging market for Irish tourism, it’s “not a fundamental market at the moment” with about 100,000 Chinese tourists travelling here each year. Those tourists are, however, “big spenders”, he said.

Tourism is the Republic’s largest indigenous industry, worth more than €9.2 billion to the economy and supporting about 265,000 jobs. The sector is particularly vulnerable to external factors, Mr O’Mara Walsh said, noting the affect of the 2003 SARS outbreak.