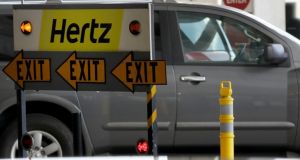 Hertz Global Holdings warned prospective new stock investors they’re all but certain to be wiped out as the car renter proceeds with an improbable share sale in the midst of bankruptcy proceedings.

Equity holders will not see a recovery from any bankruptcy plan unless those with more senior claims, including bondholders, are paid in full, Hertz said in a prospectus Monday. That would require “a significant and rapid and currently unanticipated improvement in business conditions,” the company said.

Hertz shares traded down as much as 25 per cent shortly after the start of regular trading, though the stock is still well above where it first traded after the company filed for Chapter 11. A bankruptcy court judge signed off on the equity sale last week after the company pledged to alert buyers about the potential they could be wiped out.

A lawyer for Hertz acknowledged during last week’s court hearing that the move to sell stock while in bankruptcy probably is unprecedented.

Hertz previously said in a court filing that a share sale could raise as much as $1 billion (€886 million) in cash. But that was based on the almost tenfold increase in its stock from 56 cent on May 26th to $5.53 on June 8th. The shares changed hands for as little as $2.12 on Monday.

In its filing, Hertz said it does not anticipate making lease payments on its rental cars for May or June, but will be required to start paying in full beginning in July unless the court decides otherwise. The company’s inability to work out a deal with the owners of its vehicles for a reduced payment in April pushed it into bankruptcy. – Bloomberg