Total of 3,871 people affected by collapse of Spain’s Lowcostholidays 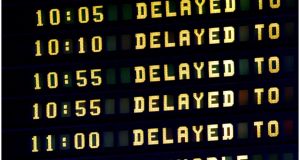 Irish air travellers hit by cancellations or disruptions received €327,503 in compensation and refunds last year, according to the State’s aviation regulator

The Republic’s aviation regulator is weighing a possible shake up of rules governing tour operators and travel agents next year.

The Commission for Aviation Regulation (CAR) which oversees airlines, travel agents and tour operators, says in its annual report that it paid €3.34 million in compensation to 3,871 Irish people hit by the collapse of Spain’s Lowcostholidays.

This was more than the bond provided by the travel agent, forcing the commission to draw on its Travellers’ Protection Fund to cover all the claims.

The commission said that, in the first half of next year, it will assess the fund and the adequacy of its current consumer protection scheme, which requires travel agents and tour operators to provide bonds.

“We will determine if this scheme continues to meet the objective of ensuring consumers are protected in the event of future collapses,” it says. “We will also consider the extent to which this scheme meets the requirements of a new EU package travel directive which needs to be applied from July 2018.”

The commission also licenses airlines to sell flights in the Republic and is meant to safeguard passengers’ rights.

Its report shows that air travellers hit by cancellations or disruptions received €327,503 in compensation and refunds last year.

The report shows that it received 5,199 queries from the public on passenger rights, 944 of them related to cancellations, delays, denial of boarding and other complaints.

Travellers were compensated in 348 cases while 54 customers were refunded the cost of their ticket or expenses.

The number of complaints in 2016 was down 7 per cent on the previous year. The commission investigated 314 cancellations, 482 delays and four downgrades.

The regulator recently intervened when it discovered that Scandinavian-backed start-up, Aer Southeast, was selling tickets for flights from Waterford Airport to Britain without a licence.

The company stopped selling flights and later pledged to return cash to customers. Aer Southeast has yet to apply to the CAR for a licence to sell flights here.

One of the CAR’s roles is to regulate the passenger charges levied by Dublin Airport, the Republic’s biggest and busiest gateway, on airlines who pass them on to customers. This year, the charges are €9.86 a-head.

Kevin Toland, chief executive of the airport’s owner, DAA, said that the State company wanted to begin talks under the CAR’s supervision with its airline customers on possible new investment in Dublin.

Its figures show that it has licensed 14 Irish-based airlines, licensed and bonded 290 travel firms and approved 45 ground handling companies.