Airbus raises fears over future of A380 superjumbo 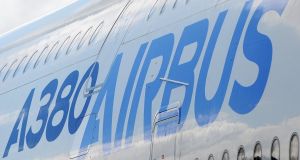 The future of the Airbus A380, the world’s biggest passenger jet, is in doubt after Airbus slashed the rate of production of the superjumbo for the second time in a year and signalled it was not optimistic about winning new orders in the short term. Photograph: Andy Rain/EPA

The future of the A380, the world’s biggest passenger jet, is in doubt after Airbus slashed the rate of production of the superjumbo for the second time in a year and signalled it was not optimistic about winning new orders in the short term.

The decision to cut the rate to fewer than one a month will be seen by many in the industry as a sign that the programme, which cost the group heavily in cost overruns and delays, may eventually be wound up. Airlines have struggled to fill the huge aircraft, although passengers have consistently rated it a favourite when travelling.

Thomas Enders, Airbus chief executive, said on Thursday the rate would now come down further to eight in 2019.

Mr Enders insisted the superjumbo had a future, saying the production cuts would give the company more time to make it more attractive to customers. He said the eight-per-year rate could be sustained into the 2020s, but he acknowledged he was pessimistic new orders would be secured this year.

The A380 was the most high-profile of several troubled programmes for the European aerospace and defence group, which announced a 35 per cent drop in adjusted earnings before interest and tax for the first six months to €1.1bn, slightly below market consensus.

Airbus admitted it could struggle to meet delivery targets for its newest A320neo single-aisle aircraft this year, due to continued problems with the Pratt & Whitney GTF engine that powers roughly half of the aircraft; it might also be forced to adjust the production rate on its troubled A400M military transport aircraft programme.

“We have a lot on our plate in second half,” Mr Enders said. “I think we can make it [but] all of our main programmes are working today under a lot of stress and strain. I am not preparing you for profit warning. I am optimistic”

Airbus was reporting just a day after rival Boeing unveiled a significantly better than expected six months, pushing its shares to a record high. Its cautious outlook stood in stark contrast to the US group’s confident and upbeat assessment.

Both aircraft makers are under pressure to produce at unprecedented rates as they seek to deliver on record order books that have built up during a near decade of booming sales.

Mr Enders delivered a stern rebuke to Pratt & Whitney over the persistent problems with its groundbreaking geared turbofan engine.

“The situation with engine makers is clearly unsatisfactory,” he said. Pratt & Whitney had introduced some fixes for this problem, he said, but “these improvements have not come through yet on a reliable basis under normal service conditions”.

Despite the troubled programmes, Mr Enders said Airbus would increase production for the A350 twin aisle, which he said was going smoothly.

In the defence division, negotiations with government customers on the troublesome military contract, the A400M, were “very constructive”, he said.

Airbus has been forced to absorb billions in extra costs on the joint European defence contract due to problems with its engine software, production issues, and more recently the power gearbox. The A400M remained “the big elephant in the room”, said Mr Enders, and he warned not to “expect a big solution in the coming months”.

“We are considering an adjustment of production levels to absorb inventory,” he said.

Mr Enders said despite these problems Airbus was sticking to its guidance for mid-digit growth this year and about 700 deliveries - subject to resolution of the engine issues.

Group revenue for the first half came in at €29 billion, unchanged on the previous year and above a median analyst estimate compiled by Bloomberg of €22.5 billion. The commercial aircraft division delivered a 3 per cent rise in sales, while defence and space fell as a result of disposals.

Helicopter revenues increased 9 per cent with deliveries of 190 units, up 16 per cent year on year. Revenues at Defence and Space reflected a negative impact of around €1.2 billion from the perimeter changes.

The cash outflow before acquisitions, disposals and customer financing improved to €2.1 billion from €2.6 billion, although this was hit by Qatar’s decision to cancel four A350 aircraft. – Copyright The Financial Times Limited 2017