Elsewhere, positive results for maker of Peugeots and Citroens, but Hyundai down 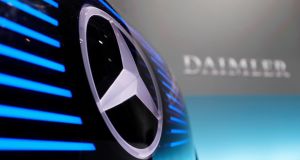 Daimler’s group earnings before interest and tax (EBIT) rose to €3.74 billion in the second quarter

Booming sales of new Mercedes-Benz cars pushed up quarterly operating profit at Germany’s Daimler by 15 per cent, slightly below consensus and overshadowed by allegations that German carmakers were involved in anti-competitive behaviour.

Daimler’s group earnings before interest and tax (EBIT) rose to €3.74 billion in the second quarter, below the average forecast for €3.81 billion in a Reuters poll.

Mercedes-Benz Cars sold 595,200 automobiles thanks to a 28 per cent rise in demand in China. Margins improved to 10.2 per cent from 6.4 per cent in the year-earlier period, mainly thanks to sales of a new E-Class limousine.

The Stuttgart-based company lifted the outlook for its trucks and vans divisions, saying it now expected EBIT to reach prior-year levels for both businesses.

But much focus is likely to be on an investigation by European Union and German antitrust regulators into whether Daimler, BMW, VW, Porsche and Audi held meetings to discuss suppliers, prices and standards to the disadvantage of foreign carmakers.

German magazine Der Spiegel reported on Friday that German carmakers colluded to fix the prices of diesel emissions treatment systems using industry committees. Companies found guilty of breaching EU cartel rules face fines of as much as 10 per cent of their global revenue.

The supervisory boards of both Daimler and Volkswagen are due to meet on Wednesday to discuss the matter.

A person familiar with the matter told Reuters on Tuesday that Daimler first raised the issue of collusion with cartel authorities, a move that could earn it immunity.

Elsewhere, PSA Group increased sales and profit in the first half, the maker of Peugeots and Citroens said, beating analyst expectations with a new profitability record at its core manufacturing division.

Net income rose 3.6 per cent to €1.26 billion on a 5 per cent increase in revenue to €29.17 billion, the French carmaker said on Wednesday, as stronger pricing more than made up for weaker sales volumes in Europe and China.

PSA rebounded from near-bankruptcy and a government-backed bailout in 2014 to an industry-leading automotive profit margin last year on the strength of cost-cutting, a pared-down lineup and determined efforts to lift prices.

The core automotive operating margin jumped from 6.8 per cent to 7.3 per cent, setting a “new historic high” for the Paris-based carmaker, chief financial officer Jean-Baptiste de Chatillon said on a conference call with reporters.

Separately, Hyundai Motor posted its smallest quarterly net profit in five years, falling dismally short of estimates, and warned the second half of 2017 would be challenging as political headwinds hit sales in China and slow US demand continues.

Hyundai Motor said its second-quarter net profit halved from a year ago to 817 billion won ($729.14 million) - its 14th straight year-on-year fall and the smallest since the first quarter of 2012.

Analysts on average had expected 1.35 trillion won. Its operating profit came in at 1.34 trillion won and sales at 24.31 trillion won for the period.

Its US incentives jumped 32 per cent to an average of $2,800 per vehicle in the first half, from a year earlier.

It is set to face more pressure as competition rises in the United States, where Asian rivals such as Honda and Toyota will be launching their newest-generation mid-sized sedans this month, going up against the face lifted Sonata to be offered by Hyundai.