Five-star Powerscourt made pre-tax profits of €1.8m ahead of sale 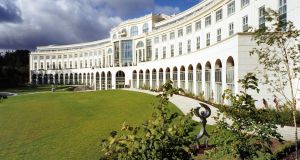 Powerscourt hotel in Co Wicklow was built by Johnny Ronan and Richard Barrett and completed in 2007. However it entered receivership in 2012.

Pre-tax profits at the company that operated the luxury five-star Powerscourt hotel in Co Wicklow which was sold last year for about €50 million, fell by 8 per cent to €1.8 million in 2018.

Hotel group MHL Collection, owned by US billionaire John Malone, purchased the hotel last March. Accounts filed at the Companies Office by the Sugarloaf Ventures Ltd show that the hotel company recorded pre-tax profits of €1.833 million in 2018 – the last full year of operation – after revenues edged up 2 per cent to €21.73 million.

The MHL Collection purchased the Enniskerry hotel from Tetrarch Capital and Midwest Holding. The MHL Collection already includes InterContinental, the Westin in Dublin and Glenlo Abbey in Galway along with a string of four-star hotels.

The directors for Sugarloaf Ventures confirm that the shareholders agreed to sell the company to MHL’s Enniskerry Ventures Ltd on March 26th last. The hotel’s amenities include 194 guest rooms – 93 of them suites – and a 30,000sq ft spa with 20 treatment rooms, two championship golf courses, a traditional Irish pub and facilities for events, conferences and weddings.

The accounts show that Sugarloaf’s pre-tax profit took account of non-cash depreciation costs of €958,857 and lease costs of €858,647 paid to a connected company.

The company recorded an operating profit of €2.2 million. Finance costs of €389,234 reduced profits to a pre-tax profit of €1.83 million.

At the end of 2018, the company had a shareholders’ deficit of €1 million. The company’s cash funds increased from €2.7 million to €3.5 million.

The Powerscourt hotel was built by Johnny Ronan and Richard Barrett and completed in 2007. However, after the property crash, the business entered examinership in 2012 and was sold the following year for a knock-down price.

1 Coronavirus: Notion of a rapid economic recovery is at best wishful thinking
2 Coronavirus: Journal Media to cut pay by up to 20 per cent
3 Nice to see you: Which is the best video calling option around?
4 Frontline bank workers to get pay top-ups during Covid-19 crisis
5 Fierce backlash to Dutch hard line on eurobonds
6 NTMA to raise billions of euro for State in bond sale amid Covid-19
7 Mother of invention: the new gadgets dreamt up to fight coronavirus
8 France proposes EU coronavirus rescue fund
9 New car sales tumble 63% as coronavirus crisis bites motor trade
10 Irish and European shares slide on Trump comments and dividend suspensions
Real news has value SUBSCRIBE