The non-stop Qantas flight from Perth to London Heathrow has been described as a “game-changer” by some in the aviation industry. 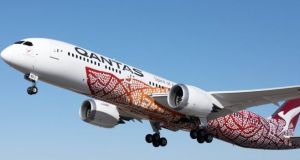 Qantas 9 (QF9) touched down at Terminal Three at 5.03am, just over 17 hours after setting off from Perth. Photograph: EPA

The first non-stop scheduled flight from Australia to the UK has landed in London – early – after a 17 hour, five minute journey across 9,300 miles (14,875km) from Perth.

Qantas flight QF9, a Boeing 787-9 Dreamliner with more than 230 passengers and crew on board, touched down at 5.03am at Heathrow on a chilly Sunday morning to a welcome from ground staff.

The landing marked the first commercial passenger jet journey direct between Australia and Europe and has been described as a “game-changer” by some in the aviation industry.

The Dreamliner, which Qantas says has 20 per cent better fuel efficiency than similar-sized aircraft, covered the 14,875km with no major dramas.

Passengers did have to endure a period of some turbulence as the plane skirted Cyclone Marcus, a storm off the west coast of Australia, shortly after take-off. QF9 departed Perth at approximately 6.57pm local time with the company chief executive, Irishman Alan Joyce, the Australian trade and tourism minister Steve Ciobo and a pack of journalists on board.

On arrival at Heathrow the plane was greeted by parade of vehicles on the tarmac with lights flashing. After touchdown Captain Lisa Norman, who was one of four working pilots on board, said: “I would like to welcome you to the history book of aviation. The world has been watching us today. Thank you for being part of something so magical and so special.”

After landing in London, Mr Joyce was also presented with the Platinum Planet Prize from aviation media specialist anna.aero. Speaking after his arrival at Heathrow, Mr Joyce said: “Qantas has been preparing for this historical, record-breaking, new route for almost a century since we were founded in 1921. Now, on touchdown in London, with the presentation of the anna.aero Platinum Planet Prize, this historical new route is instantly an award-winning route.

“I’ll accept this honour on behalf of Qantas, but I dedicate it to all the people who have served this great airline throughout its history, and who have worked ceaselessly for the delivery of the first-ever non-stop route between Australia and London.”