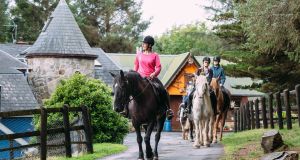 Following the success of its “Wild Atlantic Way” branding for the west of Ireland and the “Ireland’s ancient east” campaign, Fáilte Ireland has come up with a new tourism brand for the midlands.

“Ireland’s hidden heartlands” has been designed by the tourism agency to drive visitor growth across the midlands region and includes tourism master plans for the river Shannon and Beara Breifne way.

An initial €2 million investment has been allocated to begin development of the brand and further funding will follow.

The branding encourages visitors to be “active in nature” and to explore the midlands “off the beaten tracks” through a range of activities.

Additionally, a series of food networks and trails will be developed as part of the new brand.

Minister for Transport, Tourism and Sport, Shane Ross, said the brand would bring growth and jobs to the whole region. “We have always been committed to ensuring that Ireland’s success as a world-class tourist destination is shared among the regions. Some of the country’s finest natural assets are in the Midlands, including spectacular lakes, walkways and blueways. Ireland’s Hidden Heartlands will bring these gems to life,” he said.

“We believe that sustainable growth in tourism will depend on greater regional and seasonal activity and this new brand will go a long way in driving that - as well as economic and employment growth - across the Midlands.”

The tourism and hospitality industry employs an estimated 235,000 people in Ireland with visitors spending around €7.2 billion annually.

1 Are there annual limits on inheritances or gifts to a child?
2 US threatens retaliation against EU over proposed carbon tax
3 Comcast acquires Irish cloud-based telco Blueface
4 Money matters: ‘My father embarrassed us with his haggling’
5 Pilita Clark: When a rude boss keeps you waiting, why not walk out?
6 Opioid executive admits to ‘no morals’ ahead of prison term
7 Who are Ireland’s 17 billionaires?
8 Firm sues Trinity College over contract for managing visitors
9 Ryanair to pay portion of Peter Bellew’s legal costs, court rules
10 Abtran challenges award of €63m contract by Irish Water to rival company
Real news has value SUBSCRIBE